What impact will the browser ballot screen have?

The browser ballot screen is rolling out across Windows Update. Simon Brew charts its problems, the road to here, and what impact it’s likely to have. 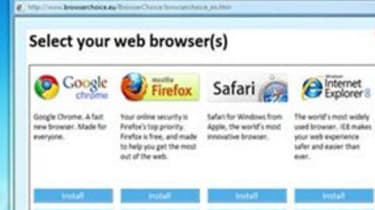 The start of this month saw Microsoft start rolling out its long promised ballot screen across its Windows operating system.

You probably know the back story to this one already: the brief version is that as a concession to the European Commission, which was set to order Microsoft to sell Windows 7 without Internet Explorer bundled in, the Redmond giant instead offered to provide a screen allowing end users to choose their browser when the software first started.

It wasn't an instantly accepted idea, but it soon seemed to make sense as the best compromise option.

The problem of the ballot screen, of course, is that it's inherently flawed no matter which way Microsoft played it. The silent majority of Windows users, you'd wager, have little interest in choosing a web browser, and were happy with having one complicity selected for them.

Thus, when the ballot screen actually appears for the first time, it's inevitably going to add confusion. In many cases, you wouldn't rule out the end user not even knowing what a web browser was.

Take, for instance, Google Chrome's billboard ad campaign a few months back. That led to many gazing at it and wondering what it was exactly that was being advertised. 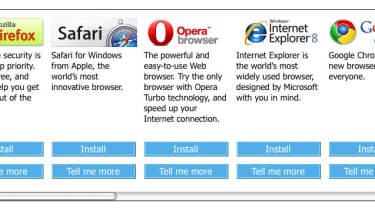 They're not selling features. Ultimately, they're trading slogans, and without a constant aggregation of review scores for each, or something of that ilk, the ballot screen has been made as bland and attractive yet utterly unhelpful as Microsoft would presumably like it to be. You get a logo and some marketing bumpf, and that's your lot.

It's hard to come up with too many ways it could have done it differently, to be fair. And it has now employed factors such as randomising the order in which the browsers appear - one of the later concessions that Microsoft had to make.

But Internet Explorer is nonetheless the world's most recognisable name in the browser market still, and while the likes of Opera are likely to benefit from the extra exposure, a sizeable number of people will inevitably choose their browser based on which one they've actually heard of.

A few more won't care and will pick one at random - we wonder if Firefox highlighting security may prove to be its best marketing tactic of all time, given the blah-filled description of the others - and the rest are arguably going to know their desired browser before they begin anyway.

Still, the market remains Internet Explorer's to lose, even if most agree that long-term, that's perhaps what's going to happen.

However, it's no coincidence that in conjunction with the roll-out of the browser screen, Microsoft has stumped up for a major advertising advertising campaign for Internet Explorer 8 that's currently running on UK TV screens.

It shows just how important this product is for Microsoft, given that it's spending a sizeable amount of money on a product that it gives away for free.

As things stand, Internet Explorer currently sits at just over 61 per cent market share, a long way from its peak of 95 per cent, and the ballot screen is likely to do that further damage. But will it be as much as expected?

Microsoft has done its best, without limited options, to load the dice as much in its favour as it can subtlely do, all while trying to avoid the wrath of European authorities. How successful it's going to be is up for debate, but few see Microsoft arresting its decline in market share.

That said, some of the smaller browsers are unlikely to do it much damage. For even though it doesn't appear so at first, the browser ballot actually has more than five names on it.

It's just that you have to do a bit of work to find the other alternatives, and that's not immediately obvious unless you regularly battle menu screens. The main screen gives you no obvious indicator that if you scroll horizontally, you can uncover further options.

Browsers hidden away there include Flock, Avant and Sleipnir, and the makers of many of the hidden alternatives have signed a letter requesting at least a bit of text explaining that there are more choices if you're willing to scroll a bit.

Microsoft has thus far simply stated that its browser ballot screen is in keeping with the decision from the European Commission. It's hardly likely to bend over any further than necessary.

Ultimately, even though it was an important concession, the browser screen was always going to be a proverbial hot potato.

Ever since Microsoft unveiled the initial design back in December there have been murmurings of complaint, and now as the ballot is pumped out across the Windows Update system there are still parties who inevitably, and perhaps rightly, aren't happy.

What's most interesting, however, are the ramifications that this ballot will have. We're not going to feel them particularly in the first month, as given the vastness of the web browser market, it's going to take more than a few weeks' worth of figures to distort it.

However, will the ballot cement Microsoft's position and help it control the fall of Internet Explorer? Has it really levelled the playing field towards the alternatives on the market? The latter is what many are expecting, but as many have found before, democracy can be a very funny thing.