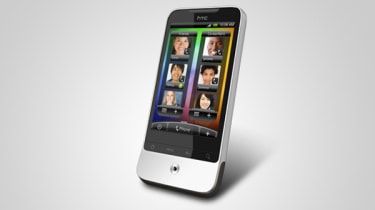 The new HTC Sense UI makes the Legend even better.

There are a number of additional features including the Friend Stream app and widget that unifies your social networking contacts. When you first turn the device on, you'll be encouraged to enter details for your Flickr, Facebook and Twitter accounts. Do this and Friend Stream will automatically stream all status updates posted in chronological order when you view the home screen widget.

We found this slow to update and scroll, although it's such a massive network operation to do, so that's no wonder.

Other aspects of the enhanced Sense UI include the ability to add groups to the People tab rather than just favourite contacts.

Multi-touch is included as standard. Upon meeting HTC before the official announcement of the Legend, the Taiwanese manufacturer was quick to insist all of its device would be coming with multi-touch as standard going forward something to look out for in the future.

This functionality is integrated into HTC's default browser, allowing you to pinch to zoom. There's also a handy feature that allows you to highlight text in the browser and look up the meaning in Wikipedia or translate it using Google's translation tools.