LinkedIn's European managing director explains why professional networks are about to get a lot more important to business users. 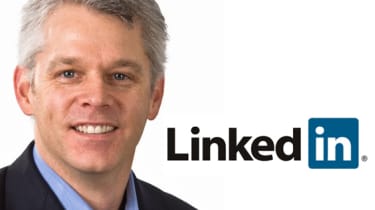 During the social networking revolution, LinkedIn has comfortably relaxed in the background of media darlings like Facebook, Twitter and MySpace, maintaining the serious demeanor its professional users are hoping their own profiles will project.

But with Outlook integration looming, is LinkedIn about to take off as the professional network hits its tipping point? We spoke to LinkedIn's European managing director Kevin Eyres to find out.

LinkedIn is seen as the business side to social networking. What's the difference between social and professional networks, and what features do you have lined up to take advantage of that reputation?

The features that we would be developing are those that enhance the professional identity, to make sure that people can have their professional reputation clearly established on LinkedIn.

It's things that make the professional more efficient and more effective, which is one of the reasons why you see the integration with Outlook, the iPhone application and the mobile applications that we have.

Those are the types of things that you're going to continue to see. How can you take the knowledge of the community, the professional community that you have, and make that working life much more efficient and that much more easier?

Microsoft has announced Outlook 2010 will integrate the big-name social networks into its email contacts system. Do you think that LinkedIn will see an increase in use after Outlook 2010 and this integrator is out, as people choose to show that side of themselves instead of their Facebook sides?

Will it be this massive boost? No, that's not necessarily what we're trying to do.

I think it will reinforce the professional identity, reinforce that the information that you share online in a professional context is that much more important, because [everyone is] going to very easily be able to see that through Outlook.

There's the ability to automatically connect to somebody straight through Outlook. Will it help build connections? Yes, we think it will. We think it will be a good enhancement, but we're not looking at that to be this big landslide of activity.

We published a feature earlier this year about paid accounts in LinkedIn, where one of our writers signed up for a paid account to see if it's worth getting. His outcome was that it wasn't worth the money for him.

Do you get much feedback from paid account holders and what sort of take-up to you have?

We want to provide a great service for free. In many ways, what we'll do is we'll give away a disproportionate amount of value to our membership. That's one of the basic company philosophies we have, giving away that value. There are going to be a certain segment of members and professionals who get extra commercial value out of reaching out beyond their immediate network.

That's really where you're going to have paid subscriptions today.

Do you see your rivals like Facebook charging for premium services, or does that only work on a professional network?

Social networks are by definition social, so they're the place where you share those sorts of [funny] pictures, connect with classmates, figure out where you're going to go on the weekend. There's less of a commercial aspect to it, so I think that they would have a difficult time in order to do that.

That's one of the things that distinguishes professional networks and social networks away from each other.

This is really where people are starting to understand how especially from a professional standpoint taking the power of information and knowledge sharing to a very different level [means you can] start to have more collaboration.

So say I've got a challenge at work or I've got an opportunity that's in front of me. I don't have all the information that I need to make a decision, so the first thing I'm going to do is go to LinkedIn in order to get that knowledge and very quickly make an informed decision because I've interacted with people I know and trust.

I think what you'll see professional networking is much more of a a business critical tool, where it's being used on a day-to-day basis in order for knowledge and information sharing.

It's like when email first came out. People were using it sometimes, but it wasn't that critical business tool. And then it became where a predominate number of people were connected on email and you could communicate very quickly. That was kind of tipping point for that application.

What we'll see in professional networking is you'll have this tipping point where vast numbers of professionals are actively using the tool so they can solve problems very quickly.

How far off do you think that is?

In some cases we're there, in many cases we're not. If you look at some IT professionals, people in Silicon Valley, people who work with ideas as an entrepreneur, then that happens very quickly and very easily on LinkedIn.

I've got this great idea for a company, I've got to look for a couple of developers, a couple of marketing people, not to employ, but to bounce this idea of off them. Entrepreneurs are using it in that kind of way right now.

It's more the general professionals. I think that is going to take more people getting on there. Everything has a bit of a life cycle where you have the early adopters and you start to become mainstream, so I think that we're starting to see where this is becoming more and more mainstream.