It’s been a long wait but Symantec finally adds deduplication to its flagship Windows backup software. We put the latest Backup Exec 2010 to the test to see what storage savings it can deliver. 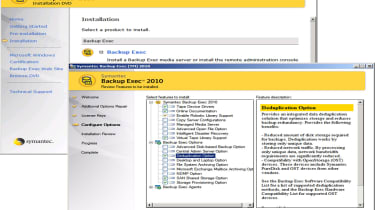 There's fashionably late and there's just plain late and Symantec is definitely the latter as it's only now that the new Backup Exec 2010 (BE2010) finally brings data deduplication to the masses. Computer Associates (CA) delivered deduplication in its ARCserve r12.5, which was released nearly a year ago so Symantec has certainly taken its time to implement this red-hot technology.

Another big difference is CA was the first and only backup software vendor to include deduplication as a core component at no extra cost. Symantec offers this as a separately chargeable module but does provide quite a few extra features.

CA opted to deduplicate only at the backup server primarily as it's faster than doing it client-side and doesn't introduce any performance overheads at the client. BE2010 offers client-side and server-side deduplication so you can decide which is better for your network.

There is a third option as BE2010 supports Symantec's OpenStorage technology and can integrate with intelligent disk services such as its PureDisk and other third party products. A single deduplication licence allows you to use two out of the three options available.

To implement deduplication in BE2010, Symantec ported over its NetBackup PureDisk solution which essentially uses the same hash-based chunking technology as everyone else. It breaks down the data into segments and computes a hash value, or fingerprint, for each block of data which it stores in a separate index file. If the fingerprint for an incoming block matches one in the index then instead of storing it, BE2010 updates its reference file with the address of that block already in the data file.

Most of the other new features lay in the shadow of deduplication but BE2010 also offers an archiving option, which is based on a light version of its Enterprise Vault. This can be applied to both file and Exchange servers where BE2010 uses rules to determine what should be archived.