Business laptops aren't supposed to look good or offer cutting-edge design, so what does Dell think it's doing by unleashing a gorgeous, slim, Adamo-style machine for £400? We review the Dell Vostro V13 to find out. 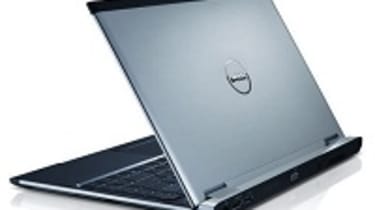 IT managers will have been familiar with Dell's Vostro range for a few years now. Just as Dell has its Inspiron and Studio systems for low and high end consumers respectively, so the Vostro range was the counterpoint to Dell's higher-end Latitude laptops.

For a while the news was all bad - Dell's Vostro laptops were clunky, boxy laptops whose limited sex appeal and poor performance was only assuaged by their high price.

But the V13 is around 1cm thick when closed, and the silver chassis feels solid and looks better than most high-end business laptops. It's portable as well. Made out of classy-feeling aluminium it weighs 1.6kg, fits in a crowded bag, and feels like it will take the knocks of a life on the road.

Its portability credentials are bolstered by its results in our battery tests. Under intensive use the V13 ran for just over two hours, while restricting our activities to light use allowed the 6-cell battery to run for a shade under four hours, so most users can expect to see something comfortably in the middle.

The only potential gripe for IT managers is that the battery isn't removable by a user, so there's no way to take a spare on a business trip, or install an increased-capacity model.

Unfold the lid and things are a bit less dazzling. The inside of the V13 is what Vostro owners will have come to expect - a lot of matte black surfaces and little glitz. It's not dreadfully ugly, but it's an abrupt contrast to the outside.

Your users should be happy, though. The keyboard is good considering V13's thin dimensions, with a reasonably solid base. And, although the action of the keys is slightly brittle, we had no problem hammering out long emails. Satisfyingly, none of the keys are half-height. It's a similar story with the track pad, which while nothing to specifically write home about, isn't distractingly poor and whose buttons offer a good solid click.