Is the desktop PC dying off?

Google thinks the desktop PC is moribund, but has anyone told the old beige box? 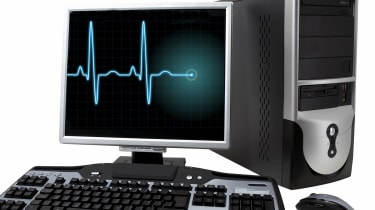 Google's John Herlihy isn't the first person to predict the death of the desktop PC. And he probably won't be the last.

Earlier this month at the Digital Landscapes conference in Dublin, Google's vice president in charge of global ad operations told a slightly bewildered audience that "in three years time, desktops will be irrelevant," adding that "In Japan, most research is done today on smart phones, not PCs. Mobile makes the world's information universally accessible."

Herlihy's remarks were given weight to by comments from Google's chief executive Eric Schmidt, at the Mobile World Conference event in Barcelona in February. "The new rule is mobile first," Schmidt said in his keynote speech.

"Mobile first in everything. Mobile first in terms of applications... Every product announcement we've done recently of course we'll have a desktop version but we'll also have one on a high performance mobile phone," he added.

From Google's perspective, the new mobile focus makes a lot of sense.

According to Morgan Stanley's December Mobile Internet Report, the mobile web market will eventually be double the size of the desktop web market.

"Regarding pace of change, more users will likely connect to the Internet via mobile devices than desktop PCs within five years," the report concludes.

Nor do the numbers look good for the old desktop PC. A recent IDC report looked forward to a period of global growth for the PC market leading up to 2014, but with sales of desktop PCs declining across all regions except Asia/Pacific and sales in emerging markets will just about keep the desktop alive.

At one end, the desktop PC is being hit by the growing use of smartphones, netbooks and notebooks. At the other end, it's being hit by a resurgence of interest in desktop virtualisation putting virtual systems on a server, not real ones on or under users' desks.

In February, IDC predicted that 10 per cent of new desktop deployments in the corporate enterprise would be virtual. In short, the prognosis isn't good. Is it time to wave goodbye to the descendants of the old beige box?

Only one foot in the grave

Maybe not. Look behind the headline-grabbing proclamations, the predictions and the statistics, and there are sound reasons why the desktop PC isn't going anywhere.

In fact, not all the predictions are so grim. Earlier this month, a survey by investment bank Caris and Company predicted a 15 to 20 per cent market growth for PCs in 2010, and while this would be driven by notebooks and netbooks, the company expected desktop PC sales to stop eroding, and "take on a low single-digit recovery after two years of decline, driven by emerging markets, corporate workhorse use and power gamers."

The key to the desktop PC's survival is that the days of one-size-fits-all computing are over.

As Curtis Campbell, senior product marketing manager for commercial desktops at Dell suggests: "In today's business environment, staff are increasingly looking to use their computers on their own terms. It is becoming very clear that it isn't about the desktop or laptop anymore, it's about the user experience."

For some of these users, the advantages of the notebook or netbook are compelling. Staff can work on the move, or use the same device at home or at work, and the screens are large enough and the processors powerful enough to make them a viable, all-day work solution.

Yet in some businesses, the desktop PC is undoubtedly a better choice. As Campbell notes: "Users in specific industries such as banking and customer service still require the performance and physical security provided by desktops."

For these industries, Campbell believes that "mobility is less important than security, manageability and scalability" all areas where the desktop system comes up trumps.

It's a point backed up by Andrew Barrow, desktop and visuals director for Lenovo in Western Europe. "In mature markets we continue to see demand for desktop PCs within industries such as financial services and customer support call centres, where employees primarily rely on their PC for data entry and transactional purposes."

"We also find that businesses within these industries typically do not want company PCs leaving the office," he continues. "In call centres, employees often share the same PC throughout the day. In these types of usage scenarios, the lost-cost, high security and easy management attributes of a desktop PC is preferred."

Nor should we forget that the needs of a user whose work mostly involves a word processor, email and spreadsheet are very different from a user whose work may extend to large-scale spreadsheet manipulation, application development, the editing of more visually intensive documents, or other forms of visualisation or content creation.

While it's possible to buy a large-screen laptop with the required processing and graphics horse power, it's more economical to outfit a department with desktop systems and screens.

John Swatton, UK marketing manager for Asus, is the first to trumpet the advantages of netbooks and notebooks, but even he admits that while "both netbooks and laptops offer a great balance to suit a variety of lifestyles there will always be consumers who both create and consume content from a fixed location, such as a school, library, office and even in the home."

When it comes to creating content, a desktop is simply the stronger device.

One more great thing about the desktop PC is its flexibility. It always has and always will evolve to meet new applications and new needs.

"While the trend is for growth in the notebook space the desktop PC is still viable," says Lenovo's Andrew Barrow. "In fact, it is reinventing itself to fill the needs of specialised markets. For example, we see high growth potential in the public and education sectors with the new commercial all-in-one desktops such as our A70z."

All-in-one PCs are certainly one of the desktop's brightest hopes. IDC predicts that the market share of all-in-one desktops will double in 2010. The likes of Asus and Acer are focusing on new form factors as well, with Intel Atom powered all-in-one net tops and small form factor PCs that clip onto monitors seen as one part of the desktop's future.

"These are ideal for everything from basic applications to full multimedia enjoyment," says Asus's John Swatton, "and their lower power consumption can deliver tremendous saving for organisations who use a large number of PCs."

This last factor is important. For a while the desktop PC has seemed like the notebooks inefficient older brother, using more energy for arguably little gain in real-world terms. Now that is changing, as more energy-efficient processors, screens, graphics processors and system architectures hit the market.

As long as this process continues, argues Dell's Curtis Campbell, "it is unlikely that desktop PCs will be replaced wholesale any time soon."

And while we'll all spend more time searching and using social networking sites on our mobiles and word processing from our laptops in the future, the desktop PC has one final ace in the whole: you can always add more performance when you need it.

If your desktop PC can't do the job, you can adapt it. If your netbook can't? Well, it's time to move on.

These are tough times for the desktop PC, and the days of one on every corporate desk are over, never to return. All the same, reports of its demise are, for now, exaggerated.

While cloud-based services could one day make the hardware platform irrelevant for those who want to communicate or write a memo, it's unlikely they'll do the same for those who need to create or manage those services, analyse a mass of scientific data or produce a good-looking 50 page report.

As long as that holds true, the desktop PC will still have a place.