We review the Fujitsu Lifebook T4410 to see whether it is a tablet that eases IT managers' headaches or just makes them worse. 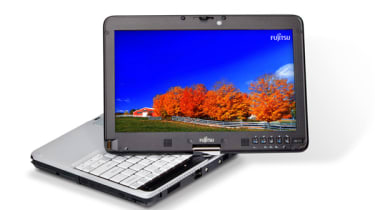 We've seen a handful of Lifebooks in the past, but this is the first time we've seen a tablet PC from Fujitsu's extensive business range and, thanks to the release of Windows 7, it could finally be the right time to invest in one of these touch screen machines.

After all, Microsoft's well-received OS comes with a raft of features designed to benefit touch machines: the built-in handwriting recognition software is now more able to adapt to and learn from the user's handwriting style, for instance, and Microsoft's Windows 7 Touch Pack includes several games and demos designed to show off the numerous capabilities of the new OS. It's even possible to upscale the size of icons and text to make them touch-friendly.

Fujitsu's impressive panel does a good job of showing off the touch features of the new OS, too: it's responsive and accurate across the entirety of its 1,280 x 800 native resolution, and it's best navigated by using the stylus included with the machine.

It's a stylish, pen-shaped instrument that comes with a couple of extra features: two buttons can be customised (although we reckon you'd be mad to stray from the default right-click setting) and the screen includes both multi-touch - so pictures and web pages can be scrolled and rotated using gestures - and an ambient light sensor.

The hardware mostly works well, too. The screen feels sturdy enough to stand the rigours of daily use, and the catch can be reversed to lock the screen against the T4410's base. There's also a row of five function buttons in one corner, which can be used to scroll up or down documents or rotate the screen's orientation through 90 degrees.