Windows Phone 7 Series could be Microsoft’s most successful platform yet, but do its hardware and software restrictions mean it’s set to fail? 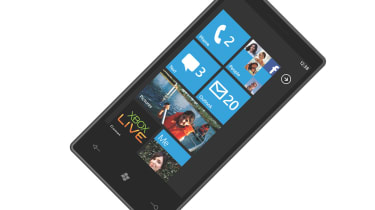 Windows Phone 7 Series seemed like it was going to change the face of Microsoft's mobile platform when it launched at Mobile World Congress (MWC) back in February.

It certainly looks like an impressive platform, with new additions such as an Xbox Hub, Office Hub to keep all your business documents and apps together, a renewed People Hub and Music Hub that uses the Zune's interface and compatibility with computer software.

However, as more details have emerged, the platform's potential to dominate the smartphone market could be flawed.

These include a capacitive touch screen with four touch points, a set number of hardware buttons, including a Start, to launch the menu, a search button that can be used in any application, such as Bing for searching the internet, the People Hub to find certain contacts or Gaming to find a contact connected to your Xbox LIVE account.

Other requirements include guidelines for GPS and the accelerometer.

Apparently, there will be no microSD card slot for hot swapping memory (or at least none that is accessible without removing the battery and backplate), so we expect to see a large amount of internal storage.

The reasoning behind having minimum hardware requirements is to make a Windows Phone 7 Series user feel familiar with their phone whichever manufacturer made it, according to Ran.

"We made the decision [to have minimum hardware requirements] and the feedback we're getting is really positive with developers and mobile manufacturers," he said. "When you get a PC, which 90 per cent of users do, you don't want to find there aren't CTRL, ALT and delete buttons."

Because of these minimum hardware requirements, none of the Windows devices currently on the market can be upgraded to Windows Phone. This is sure to disappoint many existing Windows users.

For example, the range-topping HTC HD2 features a capacitive screen, GPS and an accelerometer. However, its hardware button configuration doesn't match the guidelines set out by Microsoft, so it therefore won't be upgradeable.

Not the same as Windows Mobile 6.5

However, Windows Phone 7 is designed to appeal to a different market compared to Windows Mobile 6.5.

For starters, it's for gamers and multimedia junkies, with its integrated Xbox platform and the Picture Hub to make viewing your photos a breeze.

However, Ran was quick to stress that it's not just about consumers.

"There will be apps that will be more focused on music, video and games,but the productivity side will be very strong too. The Office Hub will be the best in class experience for Word, Excel and SharePoint for business users," he said.

The Office Hub may be there for business users, but it's nowhere near as business-focused as previous Windows incarnations were.

Considering Windows Marketplace has only just launched, this isn't a major issue, but it will come as a disappointment for those who have paid for a wealth of applications on Windows 6.5.

Much of Microsoft's plans for Window Phone 7 Series is that it will become a platform for developers to create new and exciting applications. Just like Apple, then.

The updated Windows Marketplace for Windows Phone 7 Series will include support for credit card or carrier billing, a try before you buy option, and ad-funded apps.

To buy apps using the Windows Phone 7 Series Marketplace, you can either add them to your monthly bill or use a credit card. Once the purchase is complete, the app can be added to the quick launch option within the UI.

This will potentially give more flexibility than the iPhone's App Store, although developers need to fully come onboard before it will see the same success as Apple's App Store.

Although there are requirements for devices running on Windows Phone 7 Series, there are also some important smartphone features missing from the OS.

Microsoft has made the decision not to include multitasking, cut and paste functionality or Flash in Windows Phone 7, once again demonstrating that it's a platform built primarily for consumers rather than business users.

Without multitasking, it could be considered that Windows Phone 7 Series isn't a smartphone platform at all, but a high-flying feature phone.

However, the iPhone is still a device that's proved extremely popular with business users, so maybe Microsoft is trying to win back its smartphone share by producing something that's so similar to the iPhone, it may as well be the iPhone.

The final issue with Windows Phone 7 Series is that although it's already been announced, devices running the OS won't be available until the end of the year. By then, there'll most likely be a new iPhone, Android will have been updated and if leaked screenshots of the next BlackBerry upgrade are anything to be believed, the OS will be antiquated before it even arrives.

So how will all these decisions affect Microsoft's place in the smartphone market?

Windows Phone 7 Series may be described as Microsoft's flagship OS, co-existing with Windows 6.5, but it's clear the former is designed mainly for consumers, while the latter is for business users.

Although Windows 6.5 may still not be where business users want it to be, compared to BlackBerry, it's still a top platform for business users, and that's because it has evolved somewhat to suit user demand.

Windows Phone 7 Series is a completely new platform for Microsoft almost like Google's Android platform or Apple's Mac OS stepping into the limelight once again.

Windows Phone 7 Series has the potential to be successful, but nothing feels innovative about it. It's almost as if Microsoft is consciously trying to take on the iPhone single-handedly.

Will it work for Microsoft? Only time will tell.