In our latest head to head we pit these two ebook readers against each other. But will Amazon's Kindle or Sony's Reader win out? 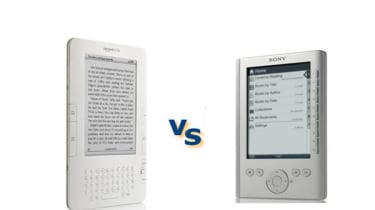 Based around energy efficient e-ink screens, ebook readers are piquing the interest of consumers at large, but are these devices versatile enough to suit business users? Priced and specified rather differently they may be, but both Amazon's Kindle and Sony's Reader are the most popular devices of their type and, crucially, represent two distinct approaches to the whole concept of viewing digital books, documents and newspapers on the go.

Whether they can survive the waves the up and coming tablet market create is another matter. Perhaps they'll morph into something quite different in the long run, given the huge brands behind them, but it's worth seeing how the big two in the ebook reader marker compare before writing them off as second-gen devices with no staying power.

When Sony promotes its PRS-300 with the tagline carry 100s of ebooks in your pocket,' it's no lie. This device is very commuter-friendly, but can carry only around 250 ebooks. Its five inch screen is also small by ebook reader standards, and Sony uses this as a selling point rather than a hindrance.

We've seen slimmer screen surrounds, but there's no QWERTY keyboard that would seriously threaten its wanderlust.

The PRS-300's e-ink Vizplex screen measures 800x600 (the same resolution as the Kindle) pixels and offers eight-level grey scale that really impresses. There's more contrast than on the Kindle's six inch screen and a cleaner backdrop to text though the sharpness is identical.