Apple vs Google: Tale of the tape

Apple and Google are moving into each other's markets - but who will come out ahead? 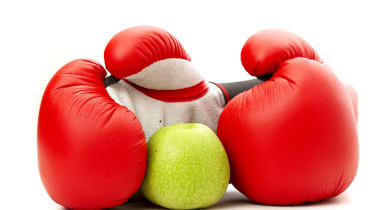 What recession? Through the eyes of the two mega giant corporations, money is good. At the end of last year, both showed jumps in revenue and profits.

Of course, it's not all rosy. Google was plagued with drops in stock over 2009 and a couple rounds of layoffs. So it was a pleasant surprise for the company when the numbers showed a 17 per cent growth in sales from last year. Google raked its latest quarter about $6.67 billion in sales and about $1.97 billion in profits.

Apple saw similar growth over the last year, but on a greater scale. The recent quarter posted $15.68 billion in salesjumping nearly a third since the same quarter in 2008. The company collected $3.38 billion in profits.

Google and Apple receive over half their revenue from international sales.

Google is in a position of great strength, and buying smaller firms up on a monthly rate. But Apple is sitting in a huge reserve of cash, and while it has made a few minor acquisitions, it seems content to hold its cash for in-house innovation. For that, Apple wins this round.