The EU's enforced €50 phone bill limit may protect us from huge phone bills while abroad, but it does nothing to address the cost of data roaming in the first place. 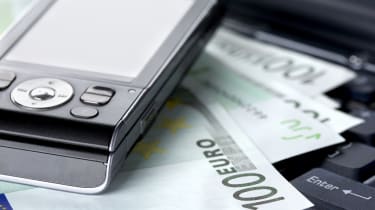 At the start of July, the European Union will enforce new legislation which will automatically cap mobile phone data bills to 50 (about 44) per month.

Once you reach that limit you're cut off, with a polite reminder pointing to the looming event horizon once you reach 80 per cent.

As of now you're able to voluntarily set your own limit with your service provider to avoid nasty bills while roaming abroad, with the 50 cap automatically being applied in July if you haven't already set a limit yourself by then.

However, welcome though this safety net might be, it only applies to countries within the EU, and does nothing to address the actual rates UK mobile users face are charged when trying to use their phone to access the internet outside of the country.

In fact, the ordinary mobile phone user risks getting caught between two stools here: on the one hand, high costs make using data while abroad hugely expensive; and on the other, an enforced cap means you'll hardly get to do so anyway.

Consumer watchdog Which? says mobile providers should voluntarily apply the 50 limit beyond the EU's borders, though the GSM Association (GSMA)disagrees, saying a 'horses for courses' approach was better in setting limits for different areas around the world.

Which? also recommends warding off high mobile phone bills by simply disabling data roaming before going abroad. But with internet use such an intrinsic part of so many smartphones' appeal these days, surely this can't be the best solution there is?

Sadly, while the cost of calls while roaming has dropped dramatically over the past couple of years, the cost of using data hasn't followed suit to nearly the same extent, despite this being the fastest growing area of mobile phone use.

So how far behind the hardware manufacturers are Britain's networks? Let's take a look at each network's roaming costs for data to get the real picture.

Vodafone is the only UK network at present that builds in data roaming allocations into its monthly contract structures.

The Mobile Broadband Travel contract offers users 200MB of data use while roaming every month, though you do pay 4.25 for every MB on top of that. The catch? The contract itself is 95 per month.

Ordinary subscribers, meanwhile, pay 4.25 per day for every 25MB of data used in Europe, with nominal amounts under 1MB charged per KB to keep costs down. This amount changes to 12.75 per 25MB in the rest of the world.

Orange sells a variety of frequent traveller packages, but to make data savings you need to specifically go for a Travel Data bundle. A monthly bundle will give you 5MB for 7.50 or 10MB for 12 over a whole month.

For more intense data usage, the Travel Data Daily package offers the best value. The first 2MB each day will cost 2, while anything more than that up to 50MB will see you pay 8.50.

Go beyond 50MB, however, and you'll have to fork out 3 for each MB used. The Travel Data bundles are available to all pay monthly or business customers.

T-Mobile's basic data rate in EU countries is one of the lowest around, at 1.50 per megabyte or 1.28 for business users, which rises to an equally attractive 7.50 per MB outside of the EU zone.

However, while its basic rates are among the cheapest, its bundles aren't. There are three options to choose from: a single-day 3MB package for 1, a 20MB bundle usable for seven days for 5, and a month-long 50MB data bundle for 10.

3 charges just 1.25 per megabyte in the EU zone, the lowest of any of the five providers. But disappointingly considering 3's self-billed status as being "focused on bringing the benefits of the internet to mobile communications", it doesn't appear to offer any data bundles at all.

O2 offers a variety of 'bolt-ons' for consumer and business users, but prices are among the highest for any network. The most basic deal gives you 10MB for 10, rising to 35 for 50MB and 70 for 200MB, with all three valid for a month. The network's basic data rate isn't cheap either at 2.55 per megabyte.

Overall, it's clear that the UK's networks are each taking a slightly different approach to how they charge their customers for using the web on their phones while abroad.

On one extreme you have 3, which charges the least per MB of all the networks, but doesn't sell any bundles at all, and on the other you have Vodafone, whose base rate is more than three times higher than 3's, but which charges just 8.50 for 50MB of data use less than any other network.

What all the networks have in common, however, is a clear distinction between calling/texting bundles and data bundles. This is partly due to the networks simply passing on what their international partners are charging them for accessing their networks, but the way the deals are structured is nonetheless a far cry from typical domestic packages, where data use is an intrinsic part of all but the cheapest monthly deals.

To illustrate, many networks have a 1GB 'fair use' data limit on their typical monthly deals in the UK. If you were to use that much data in a month while roaming in Europe, 3 would be the best network to be on, but it would still cost you 1,280 or at least it would if you didn't have a cap in place. Fair use indeed.