Six-core shootout: What to consider when buying processors

As Intel unveil its latest multi-core processor, we look at what’s out there and get the experts' views on what businesses should consider when purchasing processors. 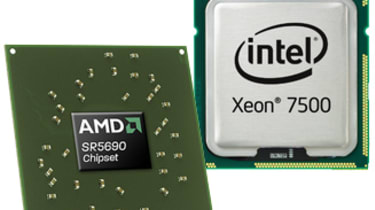 Whether you're replacing an old set of power-hungry servers or looking to upgrade for better security, making a decision about which multi-core processor to buy can be tricky.

There's a range of increasingly powerful multi-core processors available ranging from four-core through to twelve not to mention varying performance and TDP stats.

Intel claims this is its "most secure data processor" thanks to two new security features.

The first is a new set of instructions which work with AES - the standard mechanism used for most internet-based encryption like secure HTTPS - to enable faster encryption and decryption performance by accelerating the AES algorithm used commonly in security from SSL to disc encryption.

"Within a cloud environment, you have the opportunity to take workload or virtual machines from your data centre and move them into somebody else's data centre to run," added Alan Priestley, Intel's director of enterprise marketing for Europe, the Middle East and Africa (EMEA).

"So what TXT enables people who are offering third party services, [such as] external data centres, to be able to prove to you that their services and servers are trustworthy," he said. "TXT enables this hardware root of trust between you and a remote data centre."

Intel also claims that the new 5600 series will deliver "up to 60 per cent greater performance than the previous generation processor" or Xeon 5500 series across certain workloads.

"Turbo boost [allows] the processor to look at its power consumption and if it's not pushing the thermal envelope to its maximum, it can automatically increase the performance of the cores so that they'll run a bit hotter but they'll run faster," Priestley explained.

"We also have the ability to monitor power consumption using some software that we call Node manager," he said. "This is important because if I'm in an environment where I want to reduce my power consumption of my data centre during the night or during peak hours where I don't want to pay peak energy prices, I can actually tell the servers, you will only consume this much power today."

Picking processors can be difficult especially as rival AMD already has its own set of six-core processors, the 2400 and 8400 series aimed at 2P and 4P to 8P configurations which were released last year.

Teresa Osborne, product public relations manager fort the server and embedded division at AMD, revealed: "For example, for 2P systems, the new AMD Opteron 6100 Series processor offers up to 119 per cent performance improvement over the previous six-core platform on both integer and floating point measurements."

According to AMD, currently prices for the 6100 series processors range from $266 to $1,386. Osborne added that "additional memory is a key advantage. This new platform features 50 per cent higher DIMM capacity than earlier platforms with up to 12 DIMMs per processor. This increases the available memory overall and helps applications like virtualisation, database and HPC to benefit from the additional cores."

Intel has also unveiled its new Xeon 7500 series that are targeted for multi-processor platforms with up to eight cores inside the processor and provide up to 16 threads per socket.

Ultimately when choosing between multi-core processors, much depends on how you plan to make use them and the particular power, performance and workload demands of your business.

"Ultimately the numbers of cores available will increase. [But] it's not absolute core count that matters, it's actually the workload you can get out of any given core at any point in time that becomes important," Intel's Alan Priestley added.

"The other thing is it depends enormously on the workload on what you're trying to do with the processors. It's one thing to write a sequential set of instructions that do something, it's actually a lot more difficult to break up your program so it uses several cores. And this is what we mean when we talk about threading and multi-processing - taking advantage of these capabilities."

What type of processor should my business servers use?

AMD's Osborne had this advice: "The right processor choice is really based on how the customer uses its servers, what their primary work loads are, whether that is a database, High-Performance Computing (HPC), virtualisation, web server, or cloud applications."

She added: "When that processor plugs into a server platform, how does the platform as a whole perform on their businesses workloads? And power consumption should be looked at comprehensively as well."

Two crucial stats therefore include processing speed (usually given in GHZ) and the Thermal Design Point or TDP which represents the maximum amount of power the processor will consume and need to dissipate.

"TDP is important but is only one element of server power consumption. Customers need to look at the workload the server can deliver for that amount of power," Intel's Priestley added.

"Businesses need to understand what they're going to use it for and what sort of workload they have. Is it something that's going to be very transactionally intensive such as a database? Or is it going to be something which is sporadic in the way it's used web sites which may peak during the course of the day," he said.

He added: "So understanding what you're going to do with the product is very, very important because that would determine whether you maybe want to look at highly energy efficient devices or whether you're trying to get the most performance you can out of a platform."

Multi-core processors are likely to continue to grow more powerful with ever greater numbers of cores. But the real challenge for businesses will be to make best use of those cores through apps that use multiple cores and threading in a resource and energy efficient way.