The iPad and apps: Can the tablet top the iPhone?

The iPad became the second most talked about mobile device ever after the iPhone when it launched last month, but can it ever compete with the iPhone – the touch screen leader? 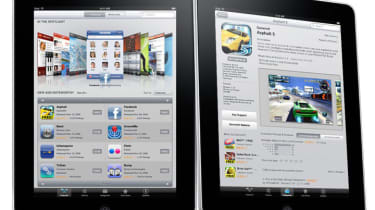 There are currently around 4,000 iPad-specific applications available on the Apple App Store, and given that's not nearly as many as the iPhone's offering - 186,00 at the time of writing - Apple's tablet has a fair way to go before it catches up.

But the question is, can it catch up? We take a look at whether the iPad can become as revolutionary as the iPhone was when it comes to applications.

While the iPad apps market is growing, all iPhone apps are available to use on the iPad, but they use upscaling.

You can sync all your existing apps with the iPad, but it's not the most efficient way to use them.

When you first open an iPhone app on the iPad, it's displayed at the iPhone's resolution 320x480 pixels.

Tap the x2' icon in the bottom right hand corner and the app with expand to fill the screen at the same resolution of the iPhone's screen.

The result is a pixelated mess with massive text.

They do work just as well on the iPad as they do on the iPhone, and looks aren't everything - except when you're on one of the most attractive devices in technology history, that is.

The iBooks application was specifically designed for the iPad, so it's no wonder it works well. It's also one of the applications that we can't see being as successful on the iPhone.

Books display as they would on an ebook reader, although the backlit screen isn't as easy on the eye as it is when reading on an e-ink screen.

Developers went mad when they heard that the iPad would have a 9.7in screen, so it's no wonder that some of the first apps developed specifically for the device were magazine and newspaper applications.

A great example of what can be down with magazines on the iPad is Zinio. It's a platform to display e-magazines on and really does make you feel like you're reading a magazine.

Although the iPhone is great for reading magazines and newspapers, the size of the screen does limit the experience.

A number of handy business tools are available on the iPad, from FTP access software and task management apps, to CRM applications and database management tools.

The iPad's screen proves particularly useful for VNC tools such as iTap VNC client. The iPad tends to reproduce your computer desktop either on a much smaller scale - making it impossible to see specific aspects of your computer's screen - or in such a way that you have to scroll around the screen.

On the iPad, your whole computer screen can be displayed at once. Even when it is shrunk down, you can still see everything clearly.

However, as the currently available iPad doesn't offer any 3G access, the idea of being able to access networked applications while outside of the office - unless you can hook onto your home or third party hotspot - is fundamentally flawed.

Productivity and Utilities is where the iPad excels. Pages is the most intuitive word processing application we've ever seen on a mobile platform.

Most of this is down to the large screen comparable to a netbook - and the large keyboard. Although it's hard to get the iPad in the correct position for typing, once you have found a comfortable way to tap away at the keys, it's as fast as using a hardware keyboard.

If you do develop a touch of RSI from typing at strange angles, the dock and keyboard attachment is available to make it easier on the wrists and eyes.

Keynote is another highly useful and effective application on the iPad. Although there's no inbuilt projector, you can produce and display PowerPoint presentations on the iPad. This is pretty impressive as most mobile PowerPoint apps only allow you to view presentations.

If you control multiple accounts though, an app such as Tweetdeck is a much more effective way of accessing all of your accounts from one place, because the screen is large enough to display columns for each account.

In terms of other social networking applications, neither LinkedIn or Facebook have have iPad versions yet, so you'll just have to use upscaling there.

IM applications seem a bit lost and clumsy on the large screen, and they also rely on Wi-Fi.

Gaming is one area where the iPad's screen comes into its own. We've tested a range of games on the iPad including Real Racing HD and Plants & Zombies.

They look amazing on the massive OLED screen, which is great. But there's a downside too as they're also controlled using touch buttons or the accelerometer and it's just not an ideal way to play games unless you're in the safety of your own home.

Using the iPad as a steering wheel is not recommended while travelling, for example.

Another issue with games in particular is that they drain the battery life, making a fully juiced iPad shrivel to nothing after a couple of hour's gameplay.

Better than the iPhone?

The iPad is a perfect device if you want to use it to read a newspaper, book or magazine. It's also perfect for creating documents of its own. These benefits are down to the screen's size and would never work on the iPhone.

However, we'd stay steer clear of using the upscaling with your existing iPhone apps - it just does not work, because iPhone apps are not designed to work on such a large screen.

Will the iPad become as big as the iPhone in the apps department? Yes - it has the potential - but it will be in an entirely different way.