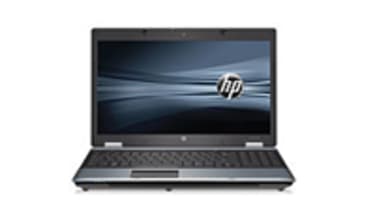 HP has done a good job with the ProBook's specification. Intel's Core i5-430M processor runs at 2.27GHz and, aside from this impressive stock speed, comes with a host of new benefits: the two cores benefit from Hyper-Threading so the system sees the CPU as a quad-core part and Turbo Boost enables one busy core to borrow power from an idle one, so the 2.27GHz core clock can be boosted to provide extra power.

The result is an impressive benchmark score of 1.51, which isn't too far off the performance we've seen from many business desktops and more than enough to power through all bar the most intensive productivity applications. It's also far in excess of last year's ProBook models, which made do with lowly Core 2 Duo chips and scored around 1.1 in the same tests.

The Core i5 chip also includes an integrated graphics chip on the die itself and, while it's not powerful enough to accommodate any after-hours gaming, it proved capable with HD video, decoding our 720p test clips effortlessly.

The 32nm processor architecture and lack of discrete GPU contributed to excellent battery life, too. The six-cell power pack lasted for 5hr 22m in our Light use benchmark tests, with this figure dropping to 1hr 22m in the heavy use tests. Still, it's more than enough to cope with trips away from the mains.

The rest of the specification has been sensibly thought out, too. Four gigabytes of RAM is plenty even if the inclusion of 32-bit Windows 7 Professional is an odd choice and there's a 320GB hard disk and DVD writer, too. Connectivity is provided by 802.11n wireless and Bluetooth 2.1, and security is enhanced by a TPM 2.1 chip and fingerprint reader. Those looking for 3G connectivity should be sated by more expensive models in the ProBook range, too.