This little dual-drive NAS appliance is big on features and expansion potential but is it as clever or as fast as Synology claims? In this review we put the latest DS710+ to the test. 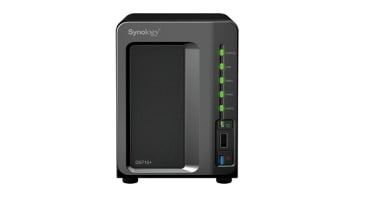 The latest Surveillance Station 4 feature is one of the best of its kind and far superior to that offered by Thecus. The DS710+ is only licensed out of the box to support one IP camera but this can be increased up to 16.

The supported camera list has been substantially expanded and we had no problems testing with an Axis 216FD. Camera installation has been streamlined with a quick set-up and search facility and you have options for using motion detection via the camera or the Surveillance Station and scheduling automatic recordings.

Real world performance was also very impressive as well with drag and drop copies of a 2.52GB video clip returning speeds of around 90MB/sec. FTP speeds crept into three figures with the Filezilla utility reporting average speeds of 101MB/sec when uploading and downloading the same test file.

Most users will want data protection so we also tested using the two drives in a RAID1 mirror which took another six hours to create. With the appliance having more RAID related work to do we saw copy speeds drop significantly to 64MB/sec whilst FTP transfers fell to under 70MB/sec.

Compared with products such as Netgear's diminutive ReadyNAS Duo, the DS710+ comes across as very pricey for a dual-drive appliance. However, overall performance is extremely good, it has more features that you can shake a stick at and the optional DX510 unit allows capacity to be easily expanded on demand.

The DS710+ is an expensive dual-drive NAS appliance but it delivers a heap of quality storage features and good speeds over Gigabit.

Mirrored arrays will hit performance but the latest firmware adds a range of valuable tools and Synology comes into its own if your future includes big capacity expansion plans.