How green IT can ease recession blues

Green technology is not just good for the environment – the recession has shown it makes business sense as well. 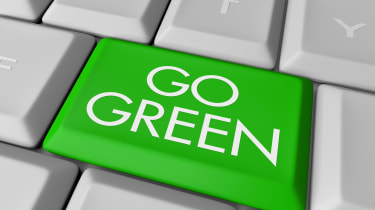 Environmental issues are now at the forefront of worldwide affairs, more than they ever have been before.

Tackling global warming is now considered a responsibility that lies not just with governments, but with the general public and businesses as well.

For the latter, one of the few positives to emerge from the recession was that environmentally-friendly operations could be beneficial for overall efficiencies. Firms started to recognise that being green could help ease recessionary blues.

Even during the recession, when economic anxieties were more pressing than any other worldwide concern, green technology remained a surprisingly pertinent area for businesses.

A Gartner survey carried out in the midst of the downturn showed that being green was not placed low down the pecking order of priorities. At the time of the poll in December 2008, almost half (46 per cent) of European respondents anticipated spending more than 15 per cent of their IT capital budgets on green projects.

What this research hinted at was a synergy between green technology and efficient business operations.

Darren Strange, head of environmental sustainability in the UK at Microsoft, explained to IT PRO that in the past, companies implementing green initiatives typically did so as part of their sense of corporate social responsibility and because of their own conviction.

"And then we realised we could save money as well by most of the practices that reduce your carbon, reduce your energy costs," Strange said.

Richard Roberts, UK and Ireland director for sustainability and the environment at Cisco, agreed about the impact of the recession on green technology: "If you look at the way that sustainability and efficiency have come together in the last six months, it is fairly dramatic."

"The view was that you could have cost reduction and a carbon agenda and the two could be fairly separate. However, I think what the recession has done is thrown the two together and people have seen the value in having a very, very proactive attitude towards the consumption of energy and what impact that can have in terms of operational efficiency, just from a pure consumption point of view."

Cutting energy use has the obvious rewards of lower outgoings and reduced emissions, regardless of the fact that businesses will most likely care more about the former.

IT can have a significant role to play in achieving these benefits in a variety of ways. One key area that firms are looking to leverage is using IT to measure energy use in the data centre, according to Nathaniel Martinez, a program director in IDC's European System Infrastructure Solutions Group.

"This is a trend that we are seeing throughout organisations and data centres in the UK," Martinez told IT PRO. He said this is mainly down to the fact that businesses now need to have better control over what is being spent and at what level.

Cutting hardware use has also emerged as a key cost-reduction strategy among organisations and here virtualisation has been a popular choice, Martinez noted.

On the one level, firms have turned to virtualisation as a way of extending the lifecycle of hardware they already run. In addition, the technology has given firms greater control of their data as well as being positive for the environment, he added.

A report from IDC this April showed that 17.7 per cent of all new servers shipped in Europe, the Middle East and Africa in the fourth quarter of last year were virtualised. This represented an increase of 16.31 per cent from the same period in 2008.

It is not only in the data centre where virtualisation can be beneficial for companies. Cisco's environmental ambassador Roberts explained: "It is important that people spread their cage a little bit broader than simply the data centre because there is value to be had at any point in the network."

"The network itself can be virtualised at many different points across the organisation," he added.

Work to be done

Even though companies are recognising the benefits of green technology, many still need to take action.

Just a third of the 250 respondents in a poll from Cisco and Greenbang earlier this year said their companies should definitely invest some of their budgets into carbon-reducing technologies in the future. This is despite 96 per cent agreeing investment into green technology was vital for the reduction of carbon emissions in the UK.

Roberts said of the research: "People wanted to know first, act second. We need them now to act as quickly as possible in a way which has the most impact."

More action may well be on the way in 2010. According to Gartner, predictions are pointing to a rebound in global venture capital and private equity investment in the clean-tech sector, which dropped back to $5.6 billion in 2009 from $8.5 billion in 2008.

Here in the UK, legislation will be important in businesses' environmentally-focused work. The CRC Energy Efficiency Scheme, previously known as the Carbon Reduction Commitment, started this April and will have an impact on many firms in the country.

The scheme will involve an annual performance league table, ranking participants on their energy-efficiency work. Companies involved will also be required to purchase allowances to cover their carbon emissions and the money raised from this will be recycled back to participants.

Roberts believes the scheme is a good starting point, but does not go far enough: "It doesn't give you a true representation of your businesses' impact upon the environment, which is ultimately what we are after."

While it is a great first step, the sustainability community needs to build on it, he added.

Of course, the development of CRC and any future legislation will have much to do with who is running the country following the election.

"Government needs to play a role in making green choices in IT easier for both individuals and companies," a Green Party spokesperson told IT PRO.

"Green MPs would push for IT and personal computing to be greener," the spokesperson explained. The party's ideas include reducing the energy consumption of computers at the design stage and improved labelling requirements, so consumers can identify at point of sale what the carbon rating of a machine is.

As for the major parties, the Liberal Democrats are coming out on top in terms of the reaction to their green policies, not just in the post-debate polls.

Both Greenpeace and Friends of the Earth have had good things to say about Lib Dem promises on the environment, which include strengthening the CRC initiative and the introduction of a 30 per cent energy efficiency improvement target for 2020.

Following the launch of the party's manifesto, Greenpeace executive director John Sauven said in a statement: "The Liberal Democrats have set out the most progressive environmental policies of all the major parties and they now have a real chance to make them count."

"As part of a coalition government, this party could establish red lines on issues like Heathrow and coal power and focus instead on developing the clean technologies that will define the 21st Century."

Of course, a coalition may never be formed, with party leaders being somewhat reticent about who they would be happy to work with. If the election does result in a hung parliament as many are predicting, and if Lib Dem leader Nick Clegg decides to isolate his party from the other two major political forces in the UK, it could result in a moratorium of sorts on the development of governmental green technology projects going ahead, for now at least.

Regardless of who wins power, businesses should not forget the lessons of the recession, in particular that green can be great for business.

What is more, IT can have a monumental part to play in helping our planet. Back in 2008, a report from the Climate Group and the Global

e-Sustainability Initiative claimed that smarter technology use could cut global emissions by 15 per cent. In addition, such measures could save global industry 500 billion in annual energy costs by 2020 - there's that synergy again.

Significantly, the study also showed how IT could help cut global emissions in areas outside the industry, such as helping to lower energy consumption from buildings and assisting in the running of smart grid technologies.

"The way in which technology offsets inefficiencies outside of technology that is the big play," said Microsoft's Strange.

"There clearly can be an argument that technology should increase its footprint in order to reduce the vast 95 per cent that goes on in business."

The IT community is in a great position. Not only can it help the environment on a massive scale, but it can help itself in the process also.

Wide-scale recognition of this could prove vastly beneficial for all involved in the years to come.