Countdown to the Election 2010

The countdown is nearly over for the election. We round-up the big tech and business stories. 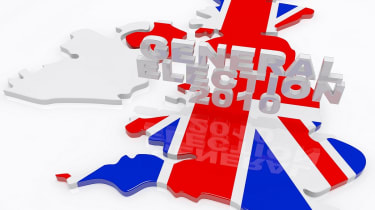 This year, as part of the pre-election activities, the three main parties have both focused on and used IT to their advantage. We round-up who's said what, when, why and, more importantly what it means to your business.

So the Digital Election is nearing the finish line but not without its highs and lows.

It seems the Labour party couldn't quite get the hang of a little website called Twitter, with one candidate fired for his rude tweeting and another leaking postal vote results over the microblogging site.

The Conservative Party also had their failings when it came to using technology, coming out with the slowest of all the party's websites, which took a painstaking average of 24.78 seconds to load.

However, despite the mistakes the role of social networking and the internet has been very prevalent in this election, for example when the three party leaders agreed to take part in online debates using Facebook and YouTube.

Then there were the TV debates which gave the Liberal Democrats an equal platform with the two leading parties, as well as a chance for their leader Nick Clegg to hammer home his opposition to ID cards.

But this election has also brought forward new parties with new dreams. Back in March, the Pirate Party released its election manifesto focused on copyright and patent law, privacy law, and freedom of speech. Unfortunately when it came to vote day, the party only managed 1,340 votes. Not bad for a first try though!

The party could have captured the moment as in the lead up to the election the Digital Economy Bill, now passed as an act, has had a lot of focus from the IT-influenced voter.

The bill got swept through parliament in the wash-up period after the election was called, a move criticised by many and which even led Mr Clegg to promise its repeal if his party were to get into power.

But it did mean the parties spoke more of their plans for the future of technology in the UK, from Labour's pledge of 2Mbps connections for every home by 2012 to the Tory promise of 100Mbps for most by 2017.

We look at each of the major party's tech manifestos, along with one alternative party's manifesto that you may find interesting...

We also take a look at why technology has become such a hot potato in the 2010 election and how the Digital Economy Bill becoming an Act will affect your business.

Did social networking have the big effect on the election like we all thought it would? Simon Brew takes a look at what the likes of Twitter and Facebook did for the voters.

Davey questions whether 2010 will be the Twitter election, Nicole shows how you cannot force negative election PR onto the internet generation and Jennifer asks whether we should pay tax to pay for 2Mbps connections.

Now the voting is over and the results are coming in, Jennifer gives thanks to Twitter for helping her through the night.

The best of the rest: What everyone else is saying/doing

Our sister site PC PRO has kept its finger on the pulse with the digital election and it tells us why it thinks tech will have such a part to play is what they call the "General Techlection".

And The Guardian admits to a tech election but claims we just haven't been as good at it as Barack Obama in the US vote 18 months ago.

But once you have processed all that take a look at the lighter side of the tech vote with The Digital Election Blog.