We review Apple's 15in 2.6Hz MacBook Pro to see whether it lives up to the family name. 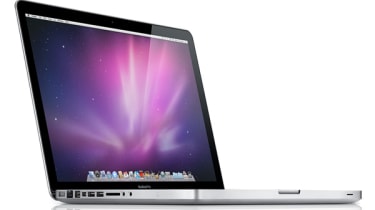 In addition to the 13in MacBook Pro that we reviewed last week, Apple gave us a 15in model to check out. Like the smaller model, its aluminum unibody and array of ports are the same as last year's model, but on the inside it's a very different beast to every portable Mac that came before it. Apple's latest 15in (and 17in) MacBooks are the first to have a Core i5 or i7 chip as their brains, so our expectations were high for an impressive boost over older models and even the new 13in ones, which contain older Core 2 Duo technology.

At this size, Apple includes two graphics processors: a less power-hungry Intel HD Graphics for lightweight tasks and an Nvidia GeForce GT 330M for heavy lifting. The approach isn't new but these particular processors are, and the way Mac OS X switches between them has been vastly improved as you no longer have to log out and in again for that to happen. Instead, the system checks for calls to graphical libraries such as OpenGL and lets the Nvidia chip flex its muscles when needed. Pick the 2.66GHz Core i7 version at 15in and you get 512MB of dedicated graphics memory for the Nvidia chip, which is halved if you step down to one of the less expensive Core i5s.

The results were even better in our multi-threaded test, which is promising if you plan to assign one of the two processor cores to a virtual machine. There is led with 530 points, 24 points and 65 points ahead of the two Core i5 models, and far beyond the 263 points that the top 13in model's Core 2 Duo achieved.