With Office 2010 about to hit its first widespread release, the battle lines are being drawn between Microsoft and Google once again. 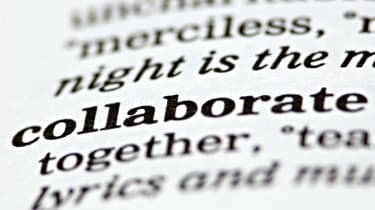 Even Google would accept that its free Google Docs office suite can't compete with Microsoft's offering feature for feature, but there is one area where it currently reigns supreme: support for real-time collaboration.

Office 2010 changes this, by enabling real-time collaboration, or co-authoring in Microsoft speak, either from the Office desktop applications or the all-new Office 2010 Web Apps.

The background to the latest Microsoft/Google turf war goes back to 2005-2006 and the first wave of web 2.0 applications.

At this point, collaborating with colleagues on a document was a nightmare. Either you had to email documents along a chain, with each author/editor making changes and someone at the end handling the final revision and merge down, or you had to share one copy of a document on a server and expect your users to take turns to access it and edit.

New groupware, communications, server and document management products helped, as did the enhanced revision tracking features introduced to Office over the years. All the same, neither approach was particularly elegant or functional.

With the initial wave of web 2.0 applications, however, savvy online developers like Zoho, Upstartle, 2Web Technologies and 37Signals realised that the internet could be harnessed to enable a more natural form of collaboration.

If a file is hosted on the web, rather than a local server or desktop, you can allow several users to read to and write from it at once. If everyone can see what everyone else is doing, and there are mechanisms in place to track versions, revert changes and safeguard file integrity, there's no need to take turns to edit or merge changes at the end you can all continue working until everyone (or at least the most senior editor) is happy.

With backing from the world's biggest web company, availability from any PC with a browser, integration with Gmail and other Google services, and that attractive free' price-tag, Google Docs was bound to make some waves in the Office software market, but real-time collaboration is widely seen as Google's killer feature.

Last September, an IDC survey noted that one-fifth of respondents replied that Google Docs was widely used in their organisation - but not necessarily at the expense of Microsoft Office.

Instead, IDC believed users within these organisations were using both suites for different purposes, employing Office for its richer feature set and formatting power, and Google Docs to collaborate on files with colleagues.

Despite this, there are questions about how important co-authoring actually is. Is this something that enterprises really need?" says T J Keitt, an analyst for IT research firm Forrester. "I've yet to be convinced that information workers really want to be able to work in the same document at the same time, overwriting each other as they go that's a hassle. What is really needed is a simpler way of doing version controls and version tracking all the rest is window dressing."

All the same, Google's success with real-time collaboration has certainly played a major part in convincing Microsoft to make it a major feature of Office 2010.

For Keitt, this isn't so much a question of co-authoring being the future, as Microsoft defending its turf. "Microsoft has web conferencing, desktop conferencing, instant messaging, and a unified communication solution that ties all of these things to its popular collaboration platform SharePoint and email server Exchange" he explains.

"If anything, they're just putting more distance between themselves and Google in the real-time space, saying, 'Yeah, we have co-authoring covered as well'."

Of course, Google won't take this lying down. The new, updated Docs service it rolled out last month features enhanced collaboration features which are arguably more real-time than Microsoft's.

One of Microsoft's goals for real-time collaboration in Office 2010 was to make it work as simply and easily as emailing a file or opening one on a server. 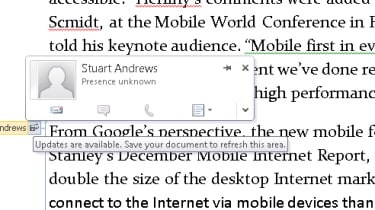 Your co-author(s), meanwhile, will be informed of your presence. Clicking on a button in the bottom left of the application window brings up a dialog listing who is working on the document at the moment, and by clicking on the name you'll open a further dialog with their contact details, and with options to email, phone or IM - providing you both have either Windows Live Messenger or Office Communicator installed.

You'll also find the same information and a contact option in the Info section of the new Office backstage view.

If you want to see what others are doing, it's easy. In PowerPoint, for example, the Slides pane to the left of the main edit pane adds a small icon to a slide when another author is working on it. In Word, meanwhile, paragraphs or objects being edited get colour-coded brackets set against them. 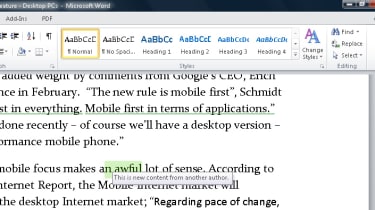 "Customers mentioned that their primary obstacle to getting real work done is continuous disruptions and interruptions" said Microsoft's Co-Authoring project leader, Jonathan Bailor, in an interview with Microsoft's News Centre in April.

"Along these lines they mentioned that having their documents change underneath them, without them having any sort of control, would interrupt and disrupt their writing process," he said.

Instead, Microsoft have chosen a save to share' model, where changes are only synchronised when you hit Ctrl-S or click the Save button. At this point, changes you make are uploaded from a local cache on your PC to the master document on the server. At the same time, changes others have uploaded to the master version are downloaded to you.

In short, you're in control of what changes and when. Your colleagues don't see your half-finished notes and fudged formatting efforts before you have a chance to knock them into shape, and you don't constantly have to deal with moving cursors and shifting paragraphs because somebody is adding paragraphs or changing fonts and styles in the section above you.

The one downside is that if you and your co-authors don't save frequently, you can suddenly be surprised by major changes. Despite Microsoft's best efforts, it's going to take some time for teams to learn how to avoid treading on each other's toes.

Of course, there are ways of keeping those toes well protected. Office 2010 gives you the ability to lock off specific areas of a document so that others can't make edits, and use the versioning features built into the Backstage view to revert changes or erase mistakes.

In client-side terms, then, Office co-authoring is simple and effective. The complexity comes in the architecture needed to support it. At the lowest end, Microsoft's collaboration with Facebook, Docs.com, doesn't allow real-time collaboration through its cut-down versions of the Office web-apps.

Once Office hits final release, this functionality should extend to co-authoring, though it's worth noting that, if our experience with the Excel web app is anything to go by, it won't be possible to co-author using desktop apps and web apps at the same time.

For SMESs and corporate customers, SharePoint Foundation 2010 and Server 2010 become the platforms of choice, with Office users signing in to a SharePoint site, opening shared documents and working on them from either the desktop or web apps (though again not a mixture of both).

Effectively, this makes Office 2010's co-authoring features not just a selling point for Office, but for the SharePoint infrastructure too.

Again, one of the attractions of this system will be security and control. IT departments used to administering a SharePoint site will have no problems handling users and permissions, and whether they opt for a local SharePoint server or a remote, hosted service, they remain in control at all times.

On the other hand, there's a certain amount of work in uploading, administering and sharing documents using Sharepoint, which can make the process of co-authoring less streamlined than it is with the Google alternative.

It's no surprise that Google's approach to real-time collaboration differs from Microsoft's, mostly because Docs is designed from the ground up to move users away from desktop apps and towards more ubiquitous cloud-based services.

Google Docs is closely tied in to Google's standard Gmail and Calendar services at the low-end and Google's business-focused Apps services above that, and the whole process is less about maintaining tight control over who can access and edit files, and more about making it as easy as possible to collaborate.

The advantage Google has is that team collaboration has always been a focus of the product. "The current tools for collaboration are broken," Google's enterprise product manager Anil Sabharwal told the US website PCMag.com in April, dismissing Microsoft's attempts to compete with Office 2010.

"Office focuses on the individual author. At the heart of every modern workplace is collaboration. We built in collaboration from the ground up. It makes document editing as simple and natural as having a conversation." 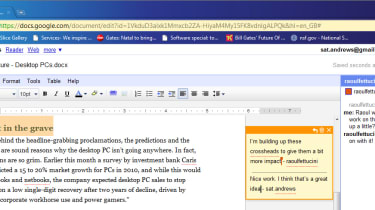 Your prospective co-authors are contacted by email, and if they have a Google Account or Google Apps account, they can be editing your document within one or two clicks.

Co-authoring in the updated Google Docs works feels a more organic process than it does in Office, in ways that are both good and bad. In the Documents word processor and Spreadsheet apps, changes and edits are rolled out as you make them, virtually in real-time, to everyone currently editing the same document.

In the word processor, what you type will appear as instantly as server traffic and connection speeds allow on your colleagues' screens. Collaboration is supported through a system of colour-coded marks.

In Documents, labelled cursors in up to ten different colours show who exactly is editing what and where, while coloured borders are added to cells in the Spreadsheet app to indicate the same. Even Google's new drawing app follows similar conventions.

What's more, the colours relate directly to the new sidebar, which names the current editors and allows for real-time text chat and commenting. The approach isn't as controlled as in the Microsoft apps it's a bit of a shock to be editing a sentence when a large image suddenly appears on the page but it's very easy to keep track of who's doing what, and the direct approach helps foster a strong collaborative vibe. 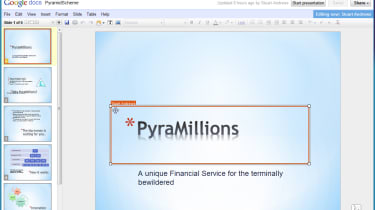 On the plus side, versioning is well supported, and you can revert to an older version of a document rapidly and easily.

We won't know who wins this particular battle until Microsoft rolls out the web apps proper and support for co-authoring over SkyDrive; something which might not happen until the Office retail release in June. At the moment, both sides have their strengths.

On its side, Google has simplicity, ease-of-access, integrated chat, low costs and browser-based ubiquity, It's a great quick and dirty tool for collaboration. On its side, Microsoft has the familiarity and unbeatable feature set of Office and a close integration with enterprise-level applications and services that the majority of enterprises already know and trust.

While that's the case it's unlikely that Google Docs will eat dramatically into Microsoft's enterprise market share, but all it needs to do is keep a foot in the door.

Microsoft's new co-authoring features mean that organisations can do both offline editing and online co-authoring from within the same package, but when Google Docs works so quickly and so well, that might not be enough to squeeze Google out.