Microsoft bullish as it unveils Office and SharePoint 2010

Sharepoint and Office 2010 will spur economic growth through partners by $6.7 billion, Microsoft has claimed. 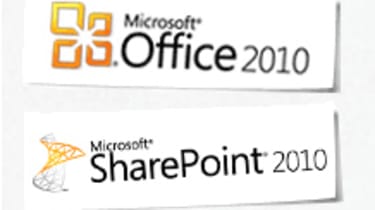 Today's release of Microsoft's Office 2010 and SharePoint 2010 will spur the global economy and could help sort out the UK's new coalition government, too.

Microsoft today unveiled its latest versions of Office and SharePoint, which are now available for business licensing users, with a consumer version hitting shelves 15 June.

Speaking at an event in London today, Jeff Teper, the corporate vice president of Office business platform said Microsoft's partners will spur the economy to the tune of $6.7 billion around the world by selling services off the back of SharePoint 2010 integration - and that's not counting how much Microsoft itself makes off sales.

SharePoint will create an "opportunity" worth $5.6 billion this year alone for Microsoft partners and third-party developers, the company said, hitting $6.7 billion next year.

The collaboration tools in the two systems could help out the new coalition government, too - and not just by boosting the economy, Teper joked. "They're going to need to collaborate... maybe we should make a stop at Number 10 on the way to the airport, see if we can share some tools with them," he said.

Microsoft believes the software packages will be a success with local businesses too, citing 8.5 million pre-release downloads in the UK alone much more than previous editions have seen, Teper noted.

Microsoft also trotted out big name UK customers like BT, Cancer Research UK and the Football Association, the latter of which is using SharePoint to manage the discipline process behind football fouls.

Consumers will be able to pick up their copies in June, with Teper saying Microsoft expects "many, many of them to do that."

Part of that will be spurred by the new Web Apps, the free online version of Office, which will be available to the 400 million Windows Live users by June as well. "We think we're going to reach many many more people with this release than any other," Teper noted.

Between Office 2010 and last year's Windows 7 release, Microsoft expects the refresh cycle to finally really kick off. "We think we are going to get into a... refresh cycle with businesses and consumers with this new release," Teper said.

Jacob Jaffe, head of Microsoft's information worker business group lead, told IT PRO: "The combination of Office 2010 and Windows 7 is a great reason and a great milestone for our customers to think about doing that refresh."

Read on for our review of the Office 2010 beta.