Touch screens are now in abundance when it comes to portable devices. In this review, we take a look at whether Toshiba’s full blown laptop is improved with such a capability. 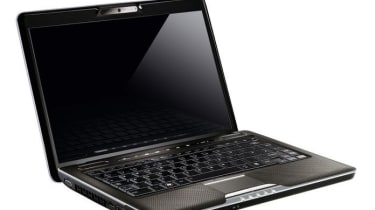 Touch screens are all the rage now thanks to the domination of smartphones and the increased interest in tablets such as Apple's iPad.

Toshiba has taken its own path with its device and instead launched a fully functioning laptop with a touch screen. But when it doesn't fold like a tablet and isn't as portable as an iPad, is there much point?

Let's firstly take a look at the laptop itself. Appearance wise, it sticks with the Toshiba style. It is kind of bulky but attractive enough that you would be happy to be seen in and around your office or in your local Starbucks with it.

It weighs more than we would like at a portly 2.22kg but there is no pretence here that it is trying to take on the slim, sexy and svelte notebook market. So in that respect, what you see is what you get.

The model we have on review is a very dark grey what Toshiba calls "brown" with a tactile bobbled surface. This makes it a little more individual than some business laptops out there but essentially nothing too stylish.

On opening the laptop the bobbled texture continues around the edge of the keyboard but not onto the screen surround, which takes on a shiny black surface instead.

This is also true of the keyboard itself. Black and shiny, it doesn't really look like it fits in with the rest of the design. That said, typing is sharp, snappy and very comfortable, leaving it high in our estimation when whiling away the evenings on work documents.

The track pad is smooth and responsive although the shiny silver buttons beneath were a bit slippy and again looked out of place.

Above the keyboard you'll find an interesting little touch. Alongside the usual power button there is a long line of controls. Rather than buttons though they are more like a touch screen themselves and serve as the controls for the likes of volume and media playing. Yes, these aren't particularly necessary in this format, but it is a nice little detail for those who favour this type of interface.

So what about the all important screen itself? At 13.3in it is a good size, with an integrated webcam sat embedded above it, but when you reach the main event, the touch screen capabilities let it down.

The responsiveness isn't exactly bad but for those with a decent smartphone it might feel a little slow. Multi-touch is, as ever, a fun feature and handy for zooming in and out of documents.

Yet the problem is more the affect it has on the screen. It really ruins the quality and makes the resolution come across as quite granular and uncomfortable on the eye.

The hinge is flexible so you can adjust it easily to your own preference but there is a nasty amount of glare both in office lighting and when out and about, sending us a bit loopy when you are meant to be putting so much of your attention on this part of the product.

We do struggle to see why Toshiba didn't change the hinge and allow it to fold like a more typical tablet device rather than leaving it as a standard laptop design.

With a good sized keyboard and extra buttons available, the touch screen just seems unnecessary and we felt a little foolish commuting on the train with it whilst others looked on quizzically.

If the touch screen wasn't there and adding to the price which hits over the 700 mark we wouldn't complain about the inside of this laptop.

With an Intel Core i3-330M processor, 4GB of DDR3 RAM and a 320GB hard drive its runs smoothly, plus pre-installed Windows 7 Home premium adds to the bumper features set.

There are also a suitable number of ports two USB ports with one on each side, a 1 in 5 multimedia card reader, HDMI output and external monitor alongside a DVD Super Multi drive, Wireless-N Wi-Fi and 10/100Mbit Ethernet connectivity and Bluetooth 2.1.

But despite all this its Intel GMA HD integrated graphics do let it down somewhat and a benchmark score of 1.29 leaves a lot to be desired.

Battery life was also less than impressive as our tests showed it lasted just one hour and 16 minutes under heavy use and just shy of two-and-a-half hours with light use.

We see what Toshiba was trying to do with this laptop, giving it something a bit different to entice the user to its models. Unfortunately as much as the laptop itself is not a bad machine, the extra bit of individuality makes the performance suffer and all in all feels a tad pointless.

A mildly attractive and average performing machine, brought down by an unnecessary unique selling point, leaves us pretty disappointed with a device from a company that normally does so much better.