What will the coalition do for business and technology?

As Cameron and Clegg release their policy promises for the newly formed coalition Government, we boil down the 34 pages to let you know what will affect your business and the technology sector in the UK. 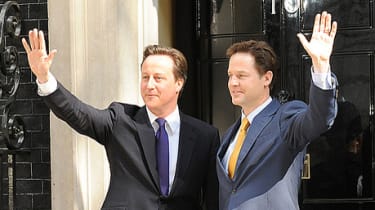 It is hard to believe the election was only two weeks ago. The days following saw a furore of back of forth between all the major political parties, doing deals in back rooms and only giving the electorate the "wait and see" option of who they would get leading the country.

But last week we saw a Conservative take over at number 10 with a surprise deputy in a Liberal Democrat and since then the debates over policy have reached boiling point.

Now that parliament is back in session, Prime Minister David Cameron has taken to the lectern and outlined the agreement between the two parties in full.

We have trawled through the 34 page document to bring you the policies that may affect your business as well as the future of technology in the UK.

Let's get down to business

The Lib/Con pledges to businesses came second only to banking. The document read: "The Government believes that business is the driver of economic growth and innovation, and that we need to take urgent action to boost enterprise, support green growth and build a new and more responsible economic model."

"We want to create a fairer and more balanced economy, where we are not so dependent on a narrow range of economic sectors, and where new businesses and economic opportunities are more evenly shared between regions and industries."

A major promise made by the parties was to give more contracts to smaller businesses, setting a goal for Government to award 25 per cent of them to UK SMBs. It will also publish all tenders in full, online and free to view.

Another thing that will affect businesses of all sizes is the pledge to extend the right to flexible working. The Government has promised to consult with businesses on the best way to do this, but it will certainly mean a boost for remote working and the technologies that go alongside it.

There were also a number of promises to cut regulations - including making registering a new business a "one-click" model - and to re-examine employment law.

A big debate between all three parties in the lead up to the election was how to handle big databases, from passport information through to keeping civilian emails.

The Government has placed these under the heading of "Civil Liberties" and has made some drastic changes compared to its predecessor.

"We will scrap the ID card scheme, the National Identity register and the ContactPoint database, and halt the next generation of biometric passports," the document boldly stated.

When it came to the DNA database, there were no plans to scrap it but instead to adopt the Scottish model.

This would mean DNA samples of convicted criminals would continue be kept indefinitely but samples from those who aren't convicted would be removed from the database, unless the charge was brought against them for a sexual or violent crime.