What does HTC's latest Android-based device have to offer users? We try to find out in this first look review. 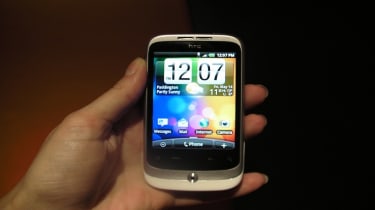 It's also easy to type on in comparison, although there's not as much space per letter as there is on the Desire's on-screen QWERTY keyboard.

The browser is also a breeze to use, thanks to the intuitive multi touch functionality. Pinch to zoom in and zoom out and highlight any text to translate it on Google Translate or look up the term in Wikipedia.

The QVGA display is just the start of the Wildfire's cost-saving features though.

The Wildfire takes a step down from the 1Ghz super-processor in the Desire, instead opting for the same Qualcomm MSM 7225 528 MHz processor as on the Hero.

This doesn't have a negative impact, thanks to the scrapping of the power-consuming AMOLED screen and 3D graphics. In fact, it seems much speedier than the HTC Hero, which was one complaint reported by HTC Hero users.

While we had the Wildfire for a brief play, we managed to switch between multiple running apps seamlessly, which isn't particularly surprising from an HTC, or Android phone.

The Wildfire runs on Android 2.1 with the latest HTC Sense UI overlaid. It's pretty standard Android fare, although feels like a more premium handset than others in the same price range.