We see how Opera's browser performs on Apple's iPhone. Does it offer a viable alternative to Safari? 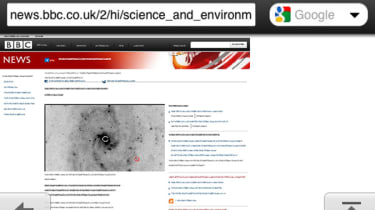 For a long time now, Apple has been accused of being closed minded, assuming it always knows best and, essentially, dictating to its customers what, exactly, is "right" for them. The recent Flash debacle adds further fuel to the fires.

However, not so long ago - 14 April to be precise - Apple stepped away from its "all knowing" stereotype and did the unthinkable. It allowed Opera Mini into the App Store, and ushered in the first ever challenge to Safari's exclusivity on the iPhone.

Opera's big unique selling point is that it's very quick - and this is generally true as a rule.

This miracle speed is achieved through data compression, which takes place on Opera's servers, before it's sent back out to your smartphone.

Because Opera processes the data on its servers, this means that the data going to your phone is just the results, so in the long run you stand to save a packet on data, which is particularly useful if you're ever abroad as it could really take the edge of those pesky roaming charges.

During testing over a Wi-Fi network, Opera Mini's speed was not immediately apparent. And once we'd established a strong connection for the sake of comparison, it was very difficult without a quantum clock, anyway to record any drastic difference between Opera and Safari.

However, on a 2G/3G network it's a very different story. Opera Mini over 3G is significantly faster than Safari. It's difficult to time exactly the difference in speed, but, generally speaking, we found that we could get Opera Mini up-and-running and have several pages - without pictures - open before Safari had properly rendered one.