As the Apple iPad arrives in the UK, can we expect all big new hardware product launches to be hit by stock shortages as part of the marketing plan? 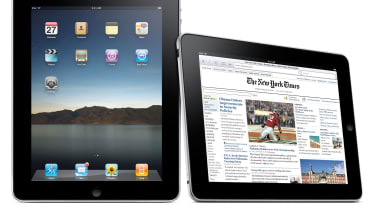 Even the most basic students of economics will be all too familiar with the laws of supply and demand. The general rule is that most of the time, if you restrict the former, then latter will rise.

And if you want to talk to some real experts on the subject, then you might want to give the academic institutions a miss on this one. Instead, head over to Apple's headquarters and get its views on the matter. The same Apple that has now overtaken Microsoft to become, in terms of market capitalisation, the world's largest technology company.

Apple isn't short of case studies about the laws of supply and demand. The most recent is its much-vaunted iPad, its thus-far highly successful assault on the tablet computer market.

The iPad, since the moment it was first announced, has been high up the wanted list for many technology enthusiasts, and this led to scenes on the product's launch day in the US when the first customers were quite literally clapped into the shop to buy one. A round of applause for queuing up for many hours to buy a product? That's a new one on us.

Not that there's been much chance for that in the UK yet.

Inevitably, given the fierce hype surrounding the iPad's launch, thousands upon thousands were sold on day one. And day two. And day three. In fact, so many iPads were sold in the US, that Apple was forced to delay the roll-out of the product in European countries.

That's why, apparently, that we're only now getting our hands on the iPad in the UK, even though many of the more enthusiastic opted to import one in from the US.

Only most of us aren't. Because delays continue to hit the UK launch of the iPad. While those who got their orders in quickly will be able to take one away, there's pretty much no chance at all of being able to walk into a shop and take one away when the product launches. Stock isn't supposed to fall into UK stores in any greater quantities until later in June, as Apple fights to contain shortages on both sides of the pond.

In the US, for instance, the one million iPads sold mark was hit in under a calendar month. If anything, the rate of sale has accelerated, and Apple says that it's been struggling to cope with the demand in the US alone, which has filtered down into stock problems right across the planet.

Name if the game

Yet isn't that now just part of the game? Isn't injecting a degree of scarcity into the availability of a new mass market technology product part of the marketing plan?

That way, newspapers and websites continue to report your product as some kind of mystical item, with online updates of stock reports on shopping forums being devoured by customers keen to find out what all the fuss is about.

Not that Apple, at least in terms of the initial push, needed much help with that. One reason that the firm has overtaken Microsoft is that unlike any technology company on the planet, Apple has an ability to excite people about products they've perhaps only seen in a small window on YouTube.

Even before Steve Jobs formally announced the iPad, thousands of people were suggesting that their pre-order would be lodged at the first possible opportunity.

However, a big launch only gets you so far, and Apple is now riding the kind of wave that only Nintendo in recent times has pulled off quite so successfully.

Nintendo, after all, for at least two years made stock shortages a regular fixture for those trying to hunt down either a Wii or a DS console. Stores were giving avid customers dates when they could come back on the off-chance that they had one in stock. It was the customer base that was driving the demand for the product off the back of the fact that they simply couldn't get hold of one.

Sticking with games consoles for a minute, the flip side of the coin is what Sony experienced with the PlayStation 3 console. Having seen the PlayStation 2 selling out on day one, the firm assumed that demand for the PS3 would be at the same level.

And yet it badly misread the market, and supply far outweighed demand. A critical error. Stores kept signs in their window on launching declaring just how many of the machines they still had in stock. The problem? The number was going down at a very, very slow rate.

That added to the perception for some time for Sony that the PS3 was not a desired console, and it's only in recent times, off the back of a massive relaunch and new design, that the company is enjoying the successes it would have hoped for.

Apple can't chance that happening. And thus whether it was deliberate or not, the stock shortages that have blighted the launch of the iPad are playing very firmly into the company's hands. Because the biggest hit the Apple brand could ever take would be if it wasn't desired any more, and if people weren't falling over themselves to get hold of one.

It's one reason why the iPhone has proven such a success too, although on a functional level, that's an easier product to sell than the iPad. Because the iPad is, in the eyes of some, the kind of product that people weren't necessarily calling out for a year ago, and only wanted one when they saw it for the first time.

It's thus the culmination of years upon years of work from Apple that it's made the iPad the success that it has thus far been. It's managed to put together not only a fresh product into the marketplace, but it's also done it in a manner that's left tens of thousands of people thinking they absolutely have to have one. Even if they've never craved a tablet PC before, as is quite likely.

That's why the stocks are short, and that's why the UK is being hit with delay after delay. Yet conversely, if that wasn't the case, then would the iPad really be desired to quite the same level? Probably not, and that's why for the foreseeable future, stock shortages are an essential part of a major technology launch of this ilk. They simply buy you the kind of publicity that you can't pick up with hard cash