Is bigger always better when it comes to business machines? We review the HP Z200 Workstation to find out. 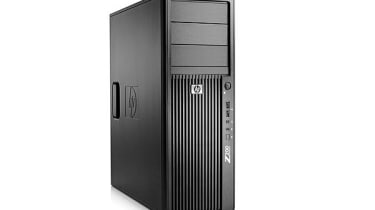 A quick glance at HP's new Z200 Workstation should show that this is a corporate machine that means business. The last couple of years have seen corporate PCs constantly downsize with smaller cases and weaker components, but this model - which boasts an Intel Core i5 processor and Nvidia QuadroFX graphics - resolutely bucks that particular trend.

The Core i5-670 processor, for instance, offers a tremendous amount of power. Its core clock speed of 3.47GHz is one of the highest since the heady days of the Pentium D, and the rest of the specification is equally impressive: Hyper-Threading means that the CPU's two cores can be used to run two processes at once, and Turbo-Boost allows power to be borrowed from idle cores to dynamically overclock busy ones.

Elsewhere, there's 512KB of L2 cache, 3MB of L3 cache and a 733MHz integrated GPU, and the Core i5's 32nm die - based on the Westmere architecture which is also used for more powerful Core i7 parts - helps increase efficiency and reduce power consumption.

The raft of impressive numbers translated to explosive real-world performance. In our application benchmarks, the HP returned a score of 1.92: far more powerful than many business machines on the market today, and more than capable of handling the most intensive of productivity applications.

The processor also contributed to a surprisingly low power draw. The powerful PC consumed just 55W when idling, and this figure rose to a mere 97W when motoring through our demanding benchmarks less than many desktop PCs use when idling.

HP has partnered this impressive CPU with a specialist graphics chip. Nvidia's QuadroFX 1800 is a mid-range part but still provides plenty of clout thanks to its 550MHz core clock, 768MB of 800MHz DDR3 RAM and 64 CUDA cores, which are vital for GPGPU applications.