We try out Google Maps Navigation to see if the free voice-guided sat-nav from Google has what it takes to replace our incumbent GPS devices. 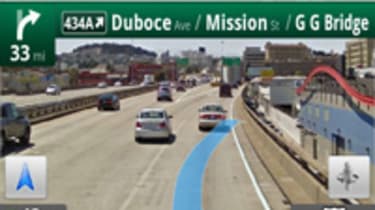 That said, like a lot of sat nav devices, Google Maps Navigation, isn't perfect and, on more than one occasion, it took us round the long way when we knew a far quicker route. However, in the grand scheme of things, if you don't know where you ae, or are completely lost, an extra five minutes here and there is a small price to pay for being on time especially, if your meeting is work related.

Another useful business application of Google Maps Navigation is that you can search for businesses within it. Again, this is an invaluable tool to have if you're attending a meeting in an unfamiliar city especially one as confusing and big as London.

Unfortunately, using Google Maps Navigation abroad is a bit of a no-go as it pulls information directly from the cloud and will, therefore, cost you a small fortune in roaming charges. But again, this is only a small niggle in an otherwise brilliant mobile application.

Another worry we had prior to testing was concerned with whether or not the voice-guided navigation would give us enough time before it demanded us to, "take a right." Fortunately, it does. In fact, we were extremely impressed with just how good it actually was during testing and it never caught us off guard by telling us to take a corner we had already passed something that cannot be said for a lot of other sat navs on the market.

Google Maps Navigation also automatically zooms in and out depending on what type of road you're on. So, say you're on the motorway, it'll zoom right out so you always have a clear view of where you're heading and when you're going slower it moves back in. Also worth noting is the fluidity with which it does this there's no lag or jerking motion whatsoever.

Traffic, especially when you are running late for a meeting, is always a nuisance. However, Google Maps Navigation can really help you avoid getting stuck in gridlocked traffic and missing that all-important meeting. It achieves this by displaying the level of traffic on your route. This is done in three colours: Red, Green and Yellow all of which represent varying degrees of traffic, so you can attempt to slink around pesky inner-city jams.

As we said, there are so many useful and, practically, priceless aspects to this application that it is almost impossible to cover them all. However, there are a few that stand out. For example, you can save locations to one of your device's home screens for quick and easy access we tested ours on a HTC Desire and loaded up an entire home screen with saved locations, which was brilliant for one touch access.

Overall, this is an invaluable application and if you have an Android smartphone with an OS 1.6 or higher make sure you get Google Maps Navigation. It'll be one of the best applications you download all year it's free, it works and it is extremely easy to use. Plus, you'll never get lost in an unfamiliar city again, which means you'll always be on time for important meetings and dates.

Google Maps Navigation is an invaluable piece of kit and should be every Android users first port of call before even contemplating the purchase of a dedicated sat-nav device.

The voice search is brilliant as is the voice-guided navigation, provided you don’t mind robotic voices. It also has enough built in features, such as congestion monitoring, single word location search and a multitude of views, such as satellite and Street View, which make Google Maps Navigation a serious force to be reckoned with.

All in all, if you have an Android 1.6 or above device you need this application. It is invaluable, efficient and, best of all, free.