Is the IT outsourcing industry in trouble?

Do Government cuts and falling confidence mean the IT outsourcing sector is about to face some hard times? 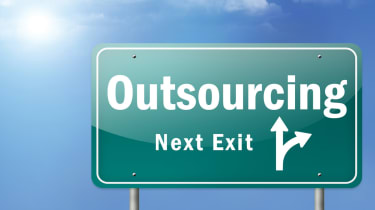 IT outsourcing could be in for a rough ride in the coming months and years.

Not only have the government's swingeing cuts caused damage to some of the big players in the industry, there are signs that confidence in outsourcing is in decline.

Is this the start of a slippery slope for the industry, or just a blip in the life of IT outsourcing?

Let's start with the bad. Certain elements of the IT outsourcing segment have been hit hard by the cuts recently announced by Chancellor of the Exchequer George Osborne.

A total of 95 million is set to be slashed from public sector IT spending and Osbourne claimed that 2 billion was being wasted by the Labour government on IT projects, suppliers and property.

Indeed, there are various deals that could be under threat, according to John O'Brien, a senior analyst at Ovum. He pointed to agreements signed in the dying days of the Labour government, such as the desktop services contract involving Fujitsu and the Department of Work and Pensions.

"Those probably could be reviewed because they fall outside of that 100 million ceiling. Obviously they would have to be revisited by the new government. It is still early days to see how they might approach that," O'Brien told IT PRO.

As the vendor helping run the Child Trust Fund, which is to be scrapped under the coalition's plans, leading UK outsourcing company Capita Group has also been hit hard by the spending streamlining.

Not as bad as it seems

While the Government's reductions in public spending may make a small impact on IT outsourcing, the sector is actually set for good times ahead, according to chairman of the National Outsourcing Association (NOA) Martyn Hart.

"In the medium term, the impact [the cuts] might have is that projects that were in the process of being placed [such as] IT outsourcing contracts might be delayed or scaled down," Hart told IT PRO.

"However, in the slightly longer medium term, like 18 months, because that is how long it takes the government to procure, it is likely the actual market for IT outsourcing services will rise because what the government has got to do is save a lot of money and they can do that with outsourcing," he added.

Hart believes that there will be a flat period for the segment, which may be followed by a minor dip, before a fast-rising upwards curve.

The rise of the small provider

If the Government cuts are not going to be overly damaging for IT outsourcing, they are going to mix things up a little for providers wanting to work in the public sector. Ovum analyst O'Brien made the point that the sector's smaller companies will actually benefit from the 100 million cap.

"They [the Government] clearly want to break up some of these big contracts into smaller components and that's good news for the smaller suppliers and it's welcome news that they want to publish future IT procurement contracts over the value of 25,000. That is certainly bringing the value right down," O'Brien said.

To remain under the 100 million cap, partnering with others may be essential for those wanting to carry on working with government, O'Brien added.

The outsourcing community may also have to deal with confidence issues.

"I would agree that confidence in terms of IT outsourcing certainly for this year has probably been shaken by some of these changes. Certainly on some of the contracts that are at risk I think some of the providers there will have their confidence shaken," said O'Brien.

A recent Ovum survey pointing to worries over security may be cause for concern as well.

The independent analyst questioned 500 chief information officers (CIOs) from across the world, just seven per cent of whom said they were thinking about getting another firm to manage their IT security over the next two years.

However, NOA chairman Hart claimed that CIOs will inherently be wary of outsourcing.

"CIOs are bound not to be too keen on outsourcing their IT because that leaves them with no empire. A couple of years ago, one government CIO told me he was the envy of other government CIOs because he had such a large empire," he said.

"The day of the mighty CIO is over and now the CIO's real job, I think, is to help the IT align with business," Hart added.

"CIOs that want to turn the clock back aren't going to be around much longer."

There is also clear faith being placed in outsourcing in general by those already in the community.

More than half of respondents to a survey from the NOA from April said that they are reviewing their current outsourcing contracts and thinking about new sourcing opportunities because of rising confidence.

Nearly two-thirds (60 per cent) of respondents to the poll, which surveyed UK outsourcing end-users, said they are planning to outsource services this year that were not outsourced before.

The financial services sector emerged as the most positive industry when it came to outsourcing, with 71 per cent of respondents from this area saying they felt upbeat about handing over work to providers in 2010 and beyond.

Both O'Brien and Hart foresee a positive outlook for IT outsourcing in the coming years, while recognising that this year could be a little sticky.

"Looking forward, I think there is a great deal to be optimistic about. The question is when will that shift happen. I think for the next 12 months we're going to be in a very uncertain phase but moving beyond that IT outsourcing [and] business process outsourcing are going to be on the up again," O'Brien added.

As with the economy at large, IT outsourcing is set for a slightly turbulent 2010. After this, however, the future is looking considerably brighter.