We review the Acer neoTouch P400 to see how it stacks up against other Windows Mobile-based smartphones and the competition. 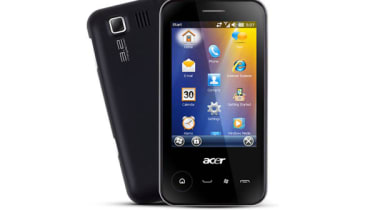 The main screen also houses a series of status icons, which you can prod to get more information or access to services. In the past it has been difficult to hit these accurately with a fingertip because of their small size, but now if you tap them a larger row of icons descends, which are easy to hit accurately.

Acer has chosen not to skin Windows Mobile so you get to see and use the OS unhampered or unaided depending on your point of view. We certainly think the decision not to skin is preferable to the skin choice Acer employed in its last series of smartphones, which we found intrusive rather than useful.

However, there is no getting away from the fact that the idea of multiple home screens made popular by Android and HTC's Sense user interface in particular, and the large, finger friendly buttons these systems employ, have combined to change our expectations of smartphone user interfaces.

Windows Mobile in its current guise just can't keep pace. With Windows Phone 7 just around the corner (as Microsoft wants the next version of its smartphone OS to be known), it is difficult to see Windows Mobile 6.5.3 getting a lot of traction.

Windows Mobile 6.5.3 supports capacitive touch screens but Acer has chose to take the resistive route here, meaning that the 3.2in, 320 x 480 pixel screen does not support multi-touch features like pinch to zoom. Not everybody feels that multi-touch is a vital feature, and the good news is that the screen is quite responsive to the touch.