Boston is the first vendor to deliver an AMD Opteron 6100 production rack server. Packing 24 cores into a 1U chassis is impressive and in this review we see what else it has to offer. 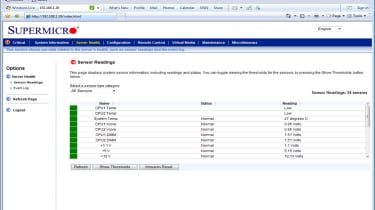 Launched in March, AMD's Opteron 6100 series of processors puts it right back in the fight with Intel as the new Magny-Cours' eight and 12 core chips allow it to compete directly not only with the 5500 and 5600 Xeons but also with the 6500 and 7500s.

A number of keys vendors have confirmed support but Supermicro trumps the likes of Dell, HP and Acer. Not only has it announced a broader range of motherboards and systems than anyone else but it also delivers the first Opteron 6100 production server well ahead of the rest.

The GP 1120-T is a 1U rack server supplied by Boston and sports a pair of 12-core 2.2GHz Opteron 6174 modules partnered by 24GB of DDR3 memory. Your processor options have been simplified by AMD as all the 6100 Series have the same 12MB of L3 cache, the same HyperTransport speed and all support 1333MHz DDR3 memory.

Choice with AMD just comes down to whether you want eight or 12 cores, one, two or four processor sockets and what clock speed. With Intel's Xeon 5500 and 5600 Series you have a bewildering range of QPI, clock and memory speeds, four or six cores, HT and Turbo Boost support and varying power consumptions.

The GP 1120-T is a smart combo of Supermicro's 1U rack chassis and H8DGU-F motherboard and at only 26in. deep, the chassis will fit in a wide range of cabinets. Storage potential is solid but unremarkable with room for a quartet of standard 3.5in hot-swap bays and the price includes a full complement of 500GB WD Enterprise SATA drives.

There's space at the front for a DVD drive along with power and recessed reset buttons. A small panel sits to the right with a collection of status LEDs for disk and network activity plus fault notification. A handy UID button alongside activates blue LEDs fore and aft for easy server identification in a rack cabinet.

Storage redundancy is limited as the motherboard uses an Adaptec HostRAID embedded controller which only supports stripes and mirrors. The four drives were preconfigured in a RAID10 striped mirror but the controller doesn't offer an option to upgrade to RAID-5.