Apple has unveiled details about the next generation iPhone. Take a look at the news as it happened. 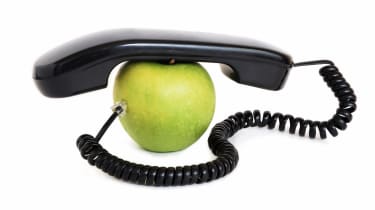 Apple's Worldwide Developer Conference kicks off today. Check back later for all the news and views from the event and details of the next iPhone.

Just hit refresh to see the latest updates as they happen.

19:56 Cue crowd applause as Jobs thanks his Apple 'family' for helping give birth to such a cool product.

19:50 The audience are now being shown a slideshow of production pics detailing how the iPhone 4 is put together.

19:42 The magical date is 24 June. Pre-orders start on 15 June. Initially shipping in five countries (UK, US, France, Germany and Japan), but will be available in 19 more countries from July.

19:37 The show's not over yet. Support for video calling has been added to the mix.

19:29 And iAds is proving popular already, with advertisers committing to spend $60 million, according to Jobs.

19:23 Talk has turned to iAds. All about "emotion and interactivity" according to the big slide in the sky.

19:17 This month will mark another sales milestone for Apple. It'll see the sale of its 100 millionth iOS-based device (umbrella term for the iPhone, iPad, iPod Touch). That's pretty good going. iBooks is also coming to the iPhone.

19:16 Bing will make an appearance too. Didn't really believe the rumours about this one to be honest, but happy to be proved wrong!

19:11 Jobs is recapping the business-friendly features of the new OS such as mobile device management and better data protection as well as support for Exchange Server 2010.

19:09 Jobs is talking about folders and multi-tasking. We're getting a bit of deja vu now.

19:04 No doubt angering some and confusing others in the audience, Jobs has asked people to turn off their wireless and put their laptops down!

18:58 It'll work pretty much like the desktop version - in theory, at least. The demo certainly looks very impressive. It'll cost $4.99.

18:57 Video recording will be 720p at 30fps with this next-gen iPhone, which will also feature tap to focus. Next up iMovie for the iPhone...

18:54 The device will feature a five megapixel camera and 5x digital zoom.

18:50 Flashing an 'environmental checklist' on the screen, Apple reckons the iPhone 4 is pretty green. It'll also feature a gyroscope, according to Jobs.

18:49 Indeed, Apple reckons the new iPhone 4's battery will enable seven hours of 3G talk, six hours of 3G browsing, 10 hours of Wi-Fi browing, 10 hours of video, 40 hours of music playback and 300 hours of standby. While these stats are impressive, we're reserving judgement until we get one to test out.

18:48 The new iPhone 4 will feature Apple's A4 processor. And because everything else is smaller (including a microSIM), the battery is better, according to Jobs.

18:42 Jobs has just asked anyone using the Wi-Fi network at the Moscone Centre to jump off for a bit to help him out!

18:41 Whoops - few glitches mean Steve might not be able to showcase these features in quite the way he wants. Someone back stage will be in trouble post event...

18:37 There's also a retina display for the camera, which boasts four times the pixel density than before. It'll result in much crisper, clearer still images, as well as video, claims Jobs.

18:33 It'll be 24 per cent thinner than the iPhone 3GS. Jobs has claimed it's the "thinnest smartphone on the planet". There's also a front-facing camera and camera with LED flash on the back. Antennas will be integrated in the frame. It's also using glass for optimal quality and stratch resistance as well as stainless steel to keep it all together.

18:32 There are more than 100 new features packed into iPhone 4 but Steve is going to now concerntrate on just eight of them.

18:31 Steve has just said what we've all been waiting for... iPhone 4. According to a slide on the big stage showing a timeline of what's happened with the iconic device since 2007, it'll be the "biggest leap since the original".

18:29 Steve's now reminiscing to what the smartphone was like pre-iPhone back in 2007. He's also showing a chart from Nielsen that shows RIM has 35 per cent market share, while Apple isn't far behind on 28 per cent.

18:27 The App Store hit five billion downloads last week. Apple kept that one quiet. And for those who think the company is either evil or mean, Jobs just said that 70 per cent of the cash generated goes to developers.

18:21 Netflix and Farmville (yep, that annoying app that tells you how many chickens your friend has just bought and clogs up their feed in Facebook) are heading to the iPhone soon. This will be great news for some and more of an annoyance for others. Particularly if their colleagues start to do their farming stuff during working hours instead of working...

18:18 Bring on the apps! Time for some of the most popular apps out there to showcase their babies.

18:16 What about the ones that don't make the cut? It's their own fault - a result of private APIs that are subject to change that could adversely affect the app, the app not doing what it says on the tin and plain and simple crash issues, according to Jobs.

18:15 It's all about the apps. And, gosh, aren't those App Store folk busy? According to Jobs, Apple receives around 15,000 app submissions in each week - spanning more than 30 languages. In perhaps a dig to those who've moaned about the rigid approval process before, Jobs claimed that 95 per cent of apps are approved within seven days.

18:11 Onto ebooks. They've been very popular and Apple has some enhancements planned to iBook to make the experience even better. These include bookmarking and a new bookshelf. Exciting stuff. Not long to wait either as Jobs reckons they'll be ready towards the end of the summer.

18:06 Now lots of different - and big - numbers are being displayed on the screen. It's hard to keep up. The iPad will be available in 19 countries by the end of July, Jobs claims. What's more, the 8,000-plus apps for the iPad have been downloaded some 35 million times.

18:05 Apparently the tablet is magical. But don't just take Steve's word for it - he's received an email from a happy punter that says just that.

18:04 It's straight to the big slides in the sky. First up, takling about the iPad's phenomenonal success and the fact it's sold two million in a short space of time. That's about one every three seconds, according to the massive fonted slide Steve is standing in front of.

17:59 Nearly time for Mr Jobs to take the stage and tell us what his company has in store for us.

17:40 20 mins to go until the main event and there are lots of eager developers and Apple fans keen to hear what Steve Jobs et al have up their sleeves.