Does the Palm Pixi have something to offer business users or is it just a pretty face? We find out in this review. 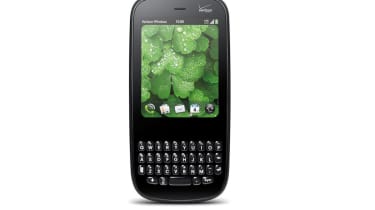 Despite all the fuss over touch screens, iPhones and iPads, there's nothing quite like a proper, physical keyboard for bashing out quick emails. That's why BlackBerry still dominates the world of business smartphones and it's this sort of market the Palm Pixi Plus begins to edge into.

For despite its outwardly consumer design, dimpled rear panel setting off the chrome Palm logo rather fetchingly, this is no glitzy show-off.

Unlike its big brother, the Palm Pre, the screen is small at 2.63in, and below it is a standard-looking QWERTY keyboard. You'll find no fancy sliding mechanisms here. When an important email or text arrives, you just pick up the phone and start tapping away.

The Pixi Plus is very small, light and unassuming. Despite the presence of a full QWERTY keyboard, it measures a mere 10.9mm thick and 56mm across, and weighs in at a hardly creditable 94g. Stick it in a pocket and you'll hardly notice it's there. Plus, without the shiny silver launcher button of the previous Pixi (now replaced with a narrow, backlit confirmation LED strip) it's even less obtrusive than before.

But despite the lack of glamour, this is a highly capable handset. The small screen, for instance, unlike most BlackBerrys, is a capacitive, multitouch-enabled display and boasts a surprisingly high pixel count too, with a resolution of 320 x 400.

Browsing the web clearly isn't as straightforward as it is on larger devices - you have to do a fair amount of zooming in and out to find the right zoom level for each page - but it does soundly thump the browsing experience on similar-sized devices such as the BlackBerry Pearl. The sensitive touch screen means clicking links, panning and zooming is a matter of merely tapping and stroking the screen gently, rather than prodding and poking.

The keyboard is a lot more usable than it looks too, with Palm's now-familiar rounded, slightly rubbery keys proving responsive and easy to type on. We managed to get up a decent turn of speed without grinding our teeth too much, and found accuracy to be good. Its small size means not everyone will get on with it so well, though so we recommend you give it a try before you buy.

And you'll find very little missing from the smartphone features checklist. There's 3G, quad-band GSM, Wi-Fi and Bluetooth for wireless connectivity, A-GPS, an accelerometer for rotating the screen automatically and 8GB of storage built in with a Micro SD slot for expansion. You also get a two megapixel camera with LED flash.