Can this budget netbook face up to its competitors and persuade people a keyboard is still in fashion? We review the Sony Vaio M Series to find out. 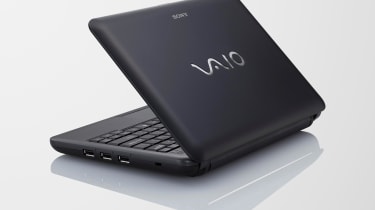 On the left-hand side, you'll find an SD card reader, Ethernet connection and VGA connector the latter of which is a great bonus to have when you are on the move and want to show off presentations on a larger screen.

How does the machine stack up in use? We were pleased to find out it came pre-installed with Windows 7 Starter edition as netbooks are becoming increasingly appealing with the latest Windows 32-bit operating systems installed.

Unfortunately being a Sony machine there were also a lot of other pieces of the company's own software clogging it up in the Sony Control Centre, which quite frankly got in the way and made the machine run slower than we would have liked.

The screen is a standard 10.1in affair but despite a decent resolution, the screen came across a tad misty and flat, with no real sharp definition on any of the colours or outlines. That said, we were impressed with the lack of glare we got from the machine, whether under the strip lights of an office environment or out in the sunshine.

We have little complaint when it comes to the M Series' inner workings. At least on first glance. It runs on an Intel Atom N470 1.83GHZ processor and boasts a 250GB hard drive. We had no issues initially with the installed memory of 1GB, as this is pretty standard for a netbook of its size, however it is not upgradable, leaving us thinking that 2GB would have just brought this machine up a little bit higher in our estimation.