Despite trumpeting the success of its complex search algorithms, Google has decided to try out a feature that will surface hand-picked content from prominent editors. 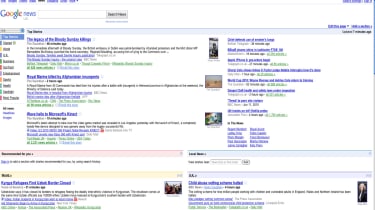 Google is trying out human editors for the Google News section of its site as one of a number of measures it believes will make the service more useful.

Until now, the job has been done by an algorithm designed to promote the most recent and popular stories to the top of the News list.

But Google has now decided to backtrack a little from this all-automated approach at least on a trial basis. As of last week, an Editor's Picks section has been added to Google News pages for a select number of users, linking to content hand-picked by prominent publishers and editors.

"Right now, we are running a very small experiment in Google News called Editors' Picks," an official statement revealed. "For this limited test, we're allowing a small set of publishers to promote their original news articles through the Editors' Picks section."

The list of partners on the issue includes Reuters, The Washington Post, Newsday, Slate, BBC News, Computer World, US Magazine, The Atlantic and Fast Company. None of them are paying for the privilege.

The change was first spotted by Nieman Journalism Lab, which noticed a new box had appeared containing links to five stories from one of the partner news services.

Google has always placed great stock in the accuracy of its search algorithms, and the company was at pains to point out that this was simply an experiment that was going out to a small number of people: "At Google, we run anywhere from 50 to 200 experiments at any given time on our websites all over the world."