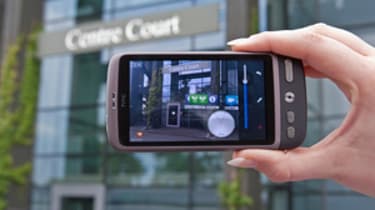 IBM has launched an app for iPhone and Android devices that is designed to make the Wimbledon tennis tournament more of an interactive and social event.

Named IBM Seer, the app offers an augmented reality experience that integrates live video streams of matches from the top three courts, as part of a deal with the BBC. This means that users can hold their phone up to an arena when outside and view the game as if looking through the walls.

Using location-aware visualisation technology, the free app offers live geo-tagged information, such as taxi queues, where to find food or drink and the quickest routes to get the classic strawberries and cream combo that Wimbledon is famous for.

Getting around the Wimbledon grounds is made easier with an interactive map and a real-time guide, while live scores will mean that Seer owners won't miss a thing.

The IBM Seer app should be available for download as soon as the famous competition begins, although Big Blue was unable to confirm any specific time or date.

Commercial director at the All England Club Mick Desmond told IT PRO that Wimbledon is trying to reach as many people as it can. This new "groundbreaking technology" will help the organisation achieve this, Desmond claimed.

"We are trying to interact with a younger demographic in an exciting way," he added, pointing to Wimbledon's Facebook and Twitter involvement.

Alan Flack, IBM's Wimbledon client and programme executive, told IT PRO that the app will add to Wimbledon's social experience. During the event, IBM will have workers on the ground, updating what is happening across the tournament on Twitter, which will also be accessible from the app.

"You have to take the content to where the people are," Flack added.

The app is not without its potential pitfalls, however. There are concerns over the accuracy of the GPS that will help people locate the various sections of Wimbledon, while excessive traffic is another issue.

However, IBM has decided to drop the quality of live video feeds if too many people are using the service, rather than risk any downtime. Special masts have also been put in place to aid connectivity.