The joojoo tablet is widely considered to be the main threat to Apple's iPad. But does it live up to expectations? We review it to find out. 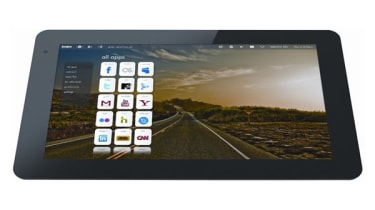 It hasn't taken long, but we've already begun to see the Apple iPad begin to creep into meeting rooms and boardrooms across the world. Whether it's for access to email, documents, photos or making notes, it seems that tablet computing, is taking businesses by storm. We've even suffered death by PowerPoint on an iPad.

It's easy to see why executives have been seduced so quickly. If you can make an impression before even displaying a slide, that's great, but to be able to do so without having to wait for your laptop to boot is a real practical advantage. And if you can get most of your work done and browse the web comfortably without having to lug a corporate brick around in a laptop bag, so much the better. It's no wonder people are willing to invest their own, hard-earned cash on getting on the bandwagon. But hold on, do you really want an iPad? Why not be different and buy a joojoo, instead?

What is it? It's the very first serious iPad rival we've come across, and it's both bigger and more impressive to look at than Apple's tablet. The main reason is it has a much larger screen. Measuring 12.1in from corner to corner, and boasting a higher resolution of 1,366 x 768 and a more modern-looking aspect ration of 16:10, the joojoo's capacitive touch screen (yes, it has one of those too) is a thing of beauty. It's bright, colourful and crisp, and, just like the iPad, there's an accelerometer to help it switch into portrait mode when you rotate it in your hands.

Fire it up and there's so much screen real estate the makers have decided to show it off to the full, by leaving most of the home screen blank, displaying instead one of the joojoo's selection of moody desktop wallpapers. On the remaining third of the screen is a scrolling panel of launch icons that launch popular websites such as Zoho, Flickr and Gmail, plus a series of text links to the far left that allows you to narrow these down by category, or access settings.