It was only unveiled yesterday, but we take a quick first look at the Toshiba AC100 to see what it brings to the table. 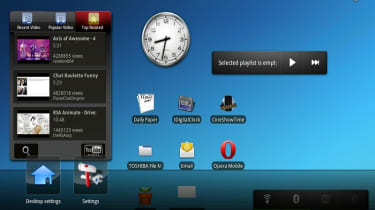 The slim and light AC100 is the kind of stylish ultraportable you'd expect to pay a high price for, and to get a couple of hours of battery life from.

It has a designer look, with a textured front so it's easy to grip and orange detailing. Toshiba isn't saying what the price will be for either the Wi-Fi or 3G versions when it goes on sale in the third quarter of the year, but it will be much lower than most notebooks of this size and weight (under 900g for the standard model) and the battery life will be far more impressive.

That's because this 10in netbook runs Android rather than Windows.

The eight hours Toshiba says you'll get with 'heavy' use of email, web browsing and video is something only the best Windows netbooks can match and that's with a heavier six or eight cell battery - and without the almost instant resume from sleep (and with five to seven days standby there's little need to power down).

Press the power button and about a second later the AC100 is ready to use. HP claims a much longer life for its Android netbook, but as with every device it depends how you use it. Toshiba general manager Thomas Teckentrup told us that you can't run the standard Windows benchmarks on Android so you can't easily compare to Windows netbooks or even other Android devices.

You can't easily compare the functionality to a netbook or ultraportable either, because what you don't get with the AC100 is Windows. That also means you don't get the familiar UI or the apps. If you've used an Android smartphone, the Home and Search keys will be familiar enough (and there are three options for the all-important menu key one button near the space bar, one in the row of function keys or you can click the right mouse button on the track pad), but the experience is rather different from on a phone.