We take a look at Toshiba's dual screen Libretto W100 to see what all the fuss is about. 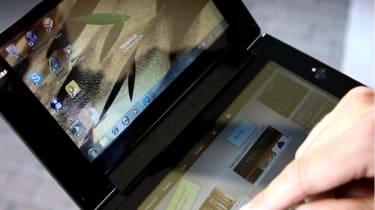 Any resemblance between the rumoured Microsoft Courier device and Toshiba's new twin-screen multi-touch tablet is entirely co-incidental, according to Toshiba, which claims that the Libretto W100 was developed independently.

This is the tablet that Toshiba hinted at back in the spring and it's certainly different from anything else on the market. The two 7in screens open like a normal notebook, Windows 7 starts up on the top screen like any other notebook and the second screen looks like a keyboard.

In fact it looks like six different keyboards. Tap an icon and it switches between a standard keyboard, one with larger keys, one with the full function key layout, a numeric keypad and two styles of split keyboard that let you hold the Libretto in both hands and type with your thumbs instead of sitting down at a table.

Haptic feedback and XT9 predictive text help make your typing more accurate and the choice of keyboards means you can switch to whichever one suits you best. There are also dedicated buttons for cut, copy, paste and other handy tools, although with a touch screen the virtual track pad seems a little pointless.

It's not as good as a physical keyboard, but we found it more accurate than the keyboards on many 7in netbooks.

Although you get all the touch features of Windows 7, like gestures to copy, paste, undo and open jump lists, you don't get one key feature. There's no pen with the W100 and we couldn't get handwriting to work - athough you can use your finger to draw diagrams in Office 2010 or finger painting in Paint. Toshiba says the screen size wouldn't suit handwriting and you'd have to keep a stylus in the leather case, but it's a shame not to get the option.