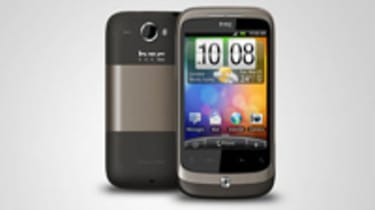 Instead, you're given access to all sorts of goodies including Outlook email support, live wallpapers (if you so wish to jazz up your smartphone) and the new and improved Android Market.

There are also a host of new widgets within the newest incarnation of HTC's Sense UI that make life easier, such as news and a Google search bar allowing you to perform searches straight from your home screen.

An obvious advantage of Android 2.1 is that you can load up to seven home screens with widgets and shortcuts, although HTC Sense has offered that functionality from the off.

Android 2.1 also brings with it an improved keyboard layout and this makes typing even more effortless than previous improvements. The accuracy is much improved in landscape mode and the subtle haptic feedback ensures you don't tap the same key twice. It also feels more spacious than before, despite the Wildfire toting a much smaller screen than on the flagship HTC Android devices.

One area that Android excels over the iPhone in business terms is its ability to organise anything into folders.

Although this new functionality has been brought to the iPhone in the iOS4 update, it only accounts for application and not files, shortcuts and applications.