We take a quick look at the newly launched Apple iPhone 4 to see if expectations match the hype. 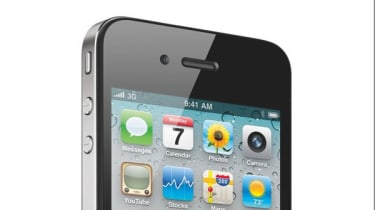 Steve Jobs claimed there was no set-up required. He was right. You just tap the FaceTime button on screen and the iPhone tries to establish the video call with the other person. If they're not using an iPhone 4, it rejects gracefully and your voice call continues uninterrupted.

By now you've probably seen reports of issues with the signal indicator when the phone is touched on the left and right sides and the bottom-left corner of its metal frame. It's easy to reproduce. That's how we held our 3GS, but so far we haven't experienced any dropped calls because of it, even when it fell to one bar, nor did call quality appear to suffer.

Even so, we live and work in areas that normally give the full five bars. If you don't, keep an eye on reports from early adopters to see how iPhone 4 holds up under weak signal conditions before you make it your main business phone. Otherwise, you could invest in a case that shields that part of the phone from contact with your body and forming a circuit between the iPhone's antennae to limit the likelihood of signal attenuation.

The sound quality in every call we've placed has been remarkably good. It seems the second, noise-canceling mic on the top of the phone does its job well, but we'll be putting it through more extensive testing in different environments over the next few days.

Beyond hardware changes, the most important update to Apple's phones could well turn out to be the new operating system. We've already been using TuneIn Radio on our 3GS running iOS4. It continues to play while you use the iPhone for one of its best features: browsing the web.

For consolidating your home and work emails, iOS 4's best feature is the unified inbox, which is standard on iPhone 4 and available on old models once updated via iTunes. It lets you see all of your incoming mail in one folder, no matter which account they're from.

It will be a great improvement for some, although if you've got more than a couple of accounts - some high priority and others that can wait until later - there's no way to exclude some from the unified inbox. Instead, you'll either have to put up with personal messages mixed in with your work ones, or resort to the old way of working and continue to jump back and forth between accounts.

Being able to gather apps into folders was rapidly becoming a necessity for us. But you can get these features on your 3GS and if you've got one of the older ones with plenty of capacity for your needs, you may want to think long and hard before you decide on splashing out or waiting another year to see what Apple pulls out of its hat. We expect you'll love it if you're coming from the original iPhone or iPhone 3G, though.

IT PRO will be bringing you a full review of the iPhone 4 once we've had a chance to test the device in more depth.

Whether you're on pay as you go or if you're looking for mobile phone contracts, visit Dial A Phone and browse their deals online.

It's still too early to tell if the iPhone 4 is going to change people's lives in quite the same way as the original and the new features may well come at the expense of design loves from years gone by. We're looking forward to spending more time with the device to bring you a full review so watch this space for the final verdict.