Fujitsu’s first Xeon 7500 rack server has a sharp focus on consolidation and virtualisation in the enterprise. It looks very good value and in this exclusive review we see if how it stacks up against Dell and IBM. 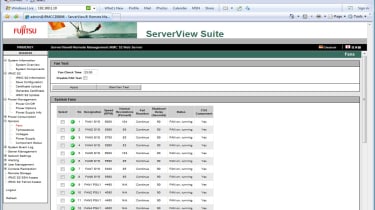 Since Intel's launch of its Xeon 6500 and 7500 processors in March we've brought you exclusive reviews of Dell's and IBM's latest rack server solutions and next up is Fujitsu's Primergy RX600 S5. We were impressed with Dell's PowerEdge R910 and IBM's System x3850 X5 for a number of different reasons and in another exclusive review we see what's special about the RX600 S5.

No surprises that Fujitsu has its eye on the lucrative UNIX server market as this is precisely where Intel wants its new Xeons to go in as replacements for expensive and proprietary RISC based systems. Traditionally, these have offered high levels of fault tolerance but Intel's new RAS (reliability, availability and serviceability) features make Xeon 7500 servers highly cost-effective alternatives.

Standing at 4U, the RX600 S5 is the same height as the Dell and IBM servers but offers an unusually high internal expansion potential. The R910 and x3850 both offer seven PCI-e 2.0 slots but Fujitsu pushes the count up to 10. You get a good mixture of slot speeds including two that support hot-swap but due to the positioning of other internal components the maximum size card supported is three-quarter length.

Storage potential is on a par with IBM as the front panel also has room for up to eight hot-swap SFF drives and Fujitsu offers a choice of SATA, 6Gb/sec SAS and SSDs. Dell wins out in this department as the R910 can start with four SFF drives and be expanded up to sixteen.

A fine choice of RAID options are on Fujitsu's menu as an 8-port SAS controller is provided as standard. This supports the latest 6Gb/sec SAS drives and comes with 512MB of cache memory and a battery backup pack. Usefully, it gets its own dedicated slot at the rear so leaving all PCI-e slots up for grabs.