The latest System x3850 X5 offers an expansion potential that defies belief. In this exclusive review we bring you the first look at IBM’s new Xeon 7500 rack server. 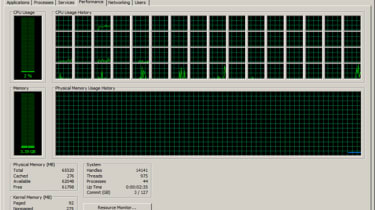 For power usage there's little between the x3850 X5 and Dell's R910. For the latter, the review system had twice as much memory but otherwise a very similar specification and pulled 539W in idle which peaked at 859W under pressure.

To achieve such a high expansion potential IBM has tweaked the QPI links on the motherboard. The links between processor sockets 1 and 2 and sockets 3 and 4 have been routed through to ports at the rear of the server which, for a single node server, can accommodate a pair of IBM's wrap cards.

With two Xeon 7500 processors these aren't required but should be used for three and four processor configurations as they create a full QPI mesh. Note also that if you want to use all PCI-e slots then you must have four processors installed.

The Max5 memory expansion option is a 1U module that sits underneath the main server and uses a quad cable kit to connect it directly to the server's QPI links. This increases the DIMM slot count to 96 allowing the server to support 1.5TB of DDR3 memory.

In our article on Intel's Xeon 6500 and 7500 processors we mentioned a glue-less' design that allows servers to be expanded to eight sockets and this is what the x3850 showcases. Linking a pair of servers together requires an X5 QPI scalability kit and once connected, both nodes are presented as a single eight-way system with 128 DIMM slots.

IBM's FlexNode feature is designed to allow a pair of servers to be joined together and separated on the fly. This can be achieved directly from the IMM web management interface without the need to remove the cables between them.

However, FlexNode requires the servers to be linked via the EXA ports on the Max5 units. As we've already mentioned, a two-node setup with each server using Max5 units is not supported at present so the FlexNode option is not currently available on the x3850 X5.