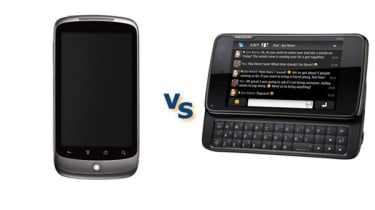 Once again, the development and implementation of applications is limited by a phone's platform and when comparing the Nokia N900 and Google Nexus One, this is a real determining factor.

The Google Nexus One is fully equipped with Android Market, but the Nokia N900 is limited with only a few applications available for it through Nokia's Ovi Store.

When Maemo becomes MeeGo, there'll be a whole new development platform with it, based upon the QT platform, and although the developer community is much smaller than Android's or iPhone's, being based on Linux will be a massive advantage for MeeGo.

It will ensure there's a much larger selection of applications available for MeeGo-based devices in future, but as it stands, the Nokia N900 is restricted in terms of what you can add.

Android Market in nowhere near the size of the applications market leader, but it has been claimed there will be more than 200,000 applications available by the end of 2010.

As it stands, the Google Nexus One and Android platform is stronger for users. This could flip round in future though.

Speed is key when it comes to smartphones designed for multitasking, and both the Nokia N900 and Google Nexus One excel here.

The Nokia N900 packs a 600Mhz ARM Cortex A8 processor, while the OS is specifically designed to conserve as much space as possible when running on full power. This management tool speeds up the processor, especially when running multiple applications.

Despite this careful consideration, the Nokia N900 just doesn't quite match the Google Nexus One, with its lightening fast 1GHz Qualcomm Snapdragon processor. It's the best in the business at the moment and that's for a reason.

Android doesn't put processor management at the top of its priorities though, so you may sometimes find some actions sluggish, especially if you're running a lot of applications at the same time.

Despite this, the Google Nexus One still excels, with its native powerhouse beneath the bonnet.