The Sony Ericsson Xperia X10 Mini Pro is the smallest Android phone to date with a QWERTY keyboard. We take a look to see how it measures up against the big boys. 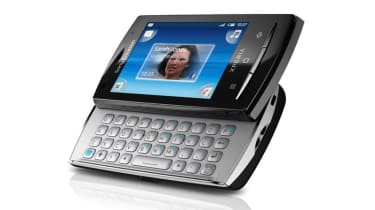 Sony Ericsson has made a valiant attempt in recent years to capture the smartphone market, testing out a range of platforms including Windows Mobile, Symbian and now Android.

At 90x52x17mm, the Mini Pro really is one of the dinkiest phones available, especially when you consider that there's a QWERTY keyboard tucked away behind the screen.

The QWERTY keyboard itself is almost unusable though, unless you have child-sized digits.

The keys, though small, feel nice under the thumb and give a satisfying click very time you depress one. If only they were the size of skittles rather than millions, then this would be an almost-perfect keyboard.

A massive issue we found with the Sony Ericsson Xperia X10 Mini Pro was that when performing some tasks, such as entering server details for synching, the phone would not flip to landscape when we pulled out the keyboard.

The accelerometer only kicks in when you pull out the keyboard, plus it's impossible to type on the device in portrait mode, meaning you'll have to type the wrong way round when using the features not supported by landscape mode.

The screen, like most features of the Xperia X10 Mini Pro is tiny at just 2.55in. However, this does have its advantages. Although the resolution is only 240x320 pixels, it looks much higher resolution and brighter than it is.

The Sony Ericsson Xperia X10 Mini Pro runs the pretty antiquated Android 1.6, which is one of the biggest let downs of the device, especially for business users.

It unfortunately means there are no advanced Exchange features such as calendar synchronisation, remote wipe or password management functions.