Lack of 'something compelling' means no HTC tablet for now. 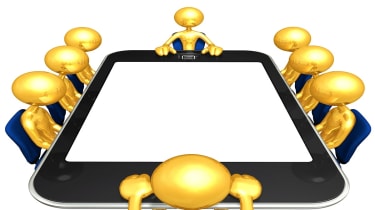 Taiwanese mobile handset maker HTC has ruled out producing a tablet form-factor device for the time being.

With the Apple iPad proving a runaway success with consumers since its launch earlier in the year, a number of other traditional mobile phone makers are believed to have larger-screened devices of their own in the pipelines, many of them running Android.

However, HTC has now removed its name from that list for now, anyway saying it would rather keep a watching brief over the tablet market's development than jump in with a rushed product.

"We are always looking at it, but, right now, the whole idea is that in order to be successful with a tablet, you need to have something compelling. And not just a compelling form factor," HTC global PR and online community manager Eric Lin told Pocket-Lint.

HTC worked with Google to produce the first consumer Android mobile phone 2008's T-Mobile G1 and has consistently been its closest ally in pushing Android's fortunes in the mobile arena, including building Google's one-off own-branded Nexus One smartphone.

For that reason, it was assumed that HTC-branded Android hardware was virtually a given in the operating system's inevitable move to the new form factor, and a number of potential candidates have emerged in rumours popping up around the web. However, Lin has confirmed they were indeed no more than that.

"You've seen how, at Computex, there were 80 different Android tablets," he added. "So if we just release an Android tablet, then we're one of 81. Whereas, if we have a compelling feature, a really compelling use, anything like that, then it'll help us to stand out.

"It's going to take a lot of work searching for that."

The comments could, of course, simply be a deliberate move to downplay expectations. However, the iPad's success in raising the tablet's profile from simply a niche computing platform has largely been in maximising its potential as a high-end consumer content delivery method the kind of "compelling feature" Lin is no doubt referring to.