The Motion Computing J3500 claims to be rugged, but is it up to the job? We review it to find out. 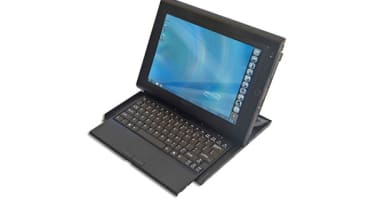 Laptops are fragile things, as you'll know if you've ever accidentally dropped, driven or spilled your tea over one. Screens crack, hard disks give up the ghost; laptops just die.

But that's no good if you regularly need to access a computer outside, or your job involves using a computer while standing up. That's where rugged computers such as Motion Computing's latest tablet PC the J3500 come in.

Built with a magnesium internal frame, thick, shock-absorbing rubber on the rear and tough plastics elsewhere, the J3500 is drop, dust and water resistant. There are sealed flaps covering all the ports and sockets (two USB, D-SUB out, Gigabit Ethernet and 3.5mm audio ports on the left edge; ExpressCard 34 and SmartCard on the right), and our review model was supplied with a 128GB SSD for extra robustness.

If you can't afford that luxury, the standard 160GB mechanical disk is still shock-mounted and has drop-sensing technology built in. The screen is shock-protected, to prevent cracking or shattering, and it very feels tough push down hard on it and you'll see barely a ripple on the LCD below. If you need more protection you can specify toughened, scratch and breakage-resistant Gorilla Glass instead.

The J3500 meets both the Military specification MIL-810G for drop resistance and the IP52 standard for dust and water ingress protection (you can see the test in action on Motion Computing's website).

What this boils down to is that you can leave the J3500 outside on a building site in the rain and the likelihood is you'll be able to carry on working when you get back from your tea break You can drop it on the floor or knock it off a worktop, while it's switched on, and it'll still be working when you pick it back up again.

And, while you might expect a little extra weight with all that protection built in, the J3500 is a comparative tiddler at 1.9kg; Dell's similarly rugged, IP54-rated Latitude XT2 XFR tablet laptop weighs a more hefty 2.45kg.