Dell is first to market with a quad socket Opteron 6100 server. It looks very affordable and in this review we see whether it’s the ideal 4P platform for SMBs. 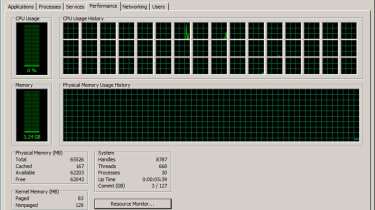 Power redundancy is on the cards as the review system includes both 1023W hot-plug supplies. This is a key area of focus for AMD and the R815 delivered the goods in our power tests.

The Opteron 6174 processors in the review system have a low rating of 80W and our inline meter recorded 335W with Windows Server 2008 R2 Enterprise in idle. With all cores pushed to the limit by SiSoft Sandra we saw this peak at 618W.

For virtualisation duties the R815 sports Dell's unique internal SD memory card controller. Dell set the ball rolling by being the first to provide an internal SD card for booting into a hypervisor but it's gone one step beyond as you now get two.

The controller keeps an onboard copy of the boot media in case it fails and the process is fully automated. We tested this by removing and reinserting the second card and saw the boot up process resynchronise its contents with the primary card.

More unique features are provided as the R815 sports Dell's Lifecycle Controller and its 1GB of NVRAM memory. This comes into its own for OS installation as we were able to boot the server into Dell's UEFI (unified extensible firmware interface) environment and deploy an OS without needing to use any boot media.