How do UK and US mobile consumers compare?

It seems consumer methods of picking up a mobile phone differ depending on your side of the Atlantic Ocean, but why? Our resident American, Hannah Douglas, casts her eye over the habits of each side. 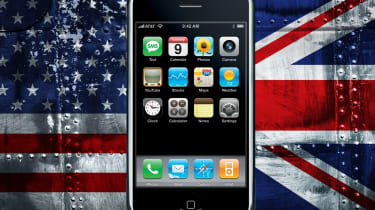 On either side of the pond, mobile phone consumers have taken different approaches to market purchases.

Variations in tariffs, contract length and even geography, brought about contrasts in the way mobile phones are purchased, but smartphones like the iPhone have challenged the norm for users on the prowl for a new mobile.

Carolina Milanesi, research vice president of mobile devices at Gartner, said a greater range of subsidies from UK providers allows consumers to choose devices with desired features and then pick that device from the provider with the best deal, a contrast to in the US.

"In the US, it's always been about the provider and the data and voice plan that best fitted your needs," Milanesi told IT PRO. "Then, you would get whatever phone the provider would put on that package."

This is evident in the different ways mobile websites show their content. The UK site Know Your Mobile displays handsets upfront whereas its sister US site, Know Your Cell, lists carriers and then shows products to consumers.

Ian Fogg, principal analyst at Forrester, geographical scale was the one significant difference between the UK and US, impacting the level of coverage on which mobile phone users rely a matter that is still a challenge to the US.

Contract lengths also vary between the two countries, with two thirds of UK consumers on prepay phones and the majority of US mobile consumers on long-term contracts.

Market differences are also a result of varying technologies used by UK and US providers, according to Fogg.

UK mobile users have a much easier time switching SIM cards between phones than they would in the US because UK carriers use essentially the same technology on the same frequencies, he added.

"Any phone can work on any network, unless it has been locked to a network, but that lock can be undone very easily," Fogg told IT PRO. "That means if consumers want to switch networks, it's relatively easy for them to do so."

However, US companies have a mix of technology, with AT&T and T-Mobile using SIM cards with CDMA technology similar to UK carriers and Sprint and Verizon use GSM.

iPhone in the market

This is why Apple's iPhone is currently exclusive to AT&T in the US, because Apple would have to make a separate handset for companies like Verizon or Sprint, Fogg added.

As for the iPhone, Fogg said it is having a major impact on both UK and US carriers, causing them to look into how they price data, avoid congestion and manage their mobile networks.

"The iPhone is actually, if anything, more of a unifying force in terms of the experience of carriers on either side of the Atlantic," he said." The experience is more similar than it is different. "

Both the lead carriers for the iPhone the US, AT&T, and in the UK, O2, have both reported congestion in network quality problems.

As for the US, historically subsidy levels have been lower than in Europe, but with the shift to higher end devices, subsidy level has increased closer to the European model.

Milanesi said it would be interesting to see changes in subsidy levels in Europe, like what was seen with the iPad. In this case nonsubsidised hardware was sold at a fairly high cost but consumers still purchased it as there wasn't a two year contract or high monthly plan tied to it.

She said when operators in other countries cut the level of subsidy, sales dropped in the short term, but then picked up again and sales went back to normal.

"That would allow carriers to lower their cost and may be a truer marker of who really the consumers are going after as far as brand, and who they like, rather than unnecessarily going with a brand that gets the highest subsidy from the carrier," Milanesi added.

Rob Bamforth, principal communications analyst at Quocirca, said the market is headed not only toward devices, but also toward applications.

"After all, most people talk about having an Android device, not a Samsung Android device," Bamforth told IT PRO. "That's because that's an app platform."

He said those involved in the market are trying to capture and understand the mobile application market and development stores.

This could ultimately weaken the carrier and device brand, he added.

"Despite the strength of the brands, I think people are typically looking to the devices," Bamforth added. "The iPhone reinforces that and the counter-marketing that's going on from the other manufacturers is also reinforcing that."

Fogg said, specifically in the smartphone area and in the arrival of mobile internet, North American companies RIM with the BlackBerry, Google with the Android and Apple with the iPhone have been the most innovative.

"Those three firms have really driven the smartphone market for the past two or three years," he said.

European handset makers like Nokia and the smartphone platform Symbian have been on the back end, fighting against the new wave of innovation coming from North America, he added.

As for the iPhone, Milanesi said the difference occurring in the UK, US and beyond is that it has generated an attention to user interfaces and intuitiveness.

"This is what Apple has done to the industry, moving away basically from focusing just on the hardware features and looking at the overall experience that a high end device should be able to deliver," Milanesi concluded.