In a world where everything is getting smaller we take a look to see what Dell's full-featured Optiplex 980 has to offer. 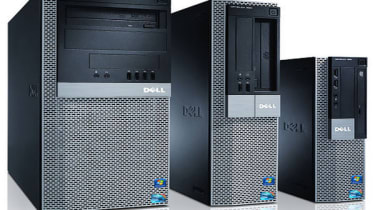 Aside from the PSU, the only fan in the entire system is attached to the processor heatsink by rubber mounts, and is surrounded by a metal cage to funnel air through the mesh at the front of the machine.

The result is a near-silent PC that won't disturb even the quietest of offices.

The larger chassis size also affords more upgrade room when compared to the average Lenovo. A hard disk can be clamped into a spare purple caddy without any tools - Dell has already provided a power cable - and the front of the chassis also offers spare 5.25in and 3.5in bays. Again, a purple bracket can be released to allow these to be used and, in a sensible touch, the screws needed to secure optical drives and other upgrades are attached to the inside of the removable drive cover.

Elsewhere, the proprietary Dell motherboard offers two spare DIMM sockets, with the machine catering for a maximum of 16GB of DDR3 RAM, and two empty SATA/300 ports. There are also two PCI slots and a pair of PCI-Express x16 slots, although one of these is restricted to x4 speed, so it wouldn't be suitable for a graphics card. Nevertheless, it's a far wider selection of upgrade paths than is available on smaller systems we've seen recently.

Dell has kitted out its impressive chassis with a powerful specification. Intel's Core i5-660 may be a mid-range part, but its 3.33GHz clock speed helped it canter to a benchmark score of 1.99 - one of the best we've seen from a business machine and more than enough to motor through the most demanding of applications.