We review Samsung's Galaxy S smartphone to see if it really is as smart as they come. 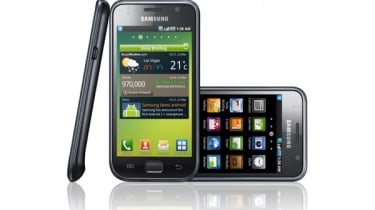 Although the large screen of the Galaxy S does make it a doddle to use the keyboard in either portrait or landscape mode, Swype makes text entry even easier.

Instead of tapping each letter individually, you can trace your finger over the keyboard to type words. It's an effective way of typing although like any new way of entering text, it'll take some time to get used to.

Battery life is pretty reasonable in comparison to the iPhone or other Android devices, and that's because Samsung has opted to include a 1500mAh juicebox.

You will still need to charge more often than a feature phone, but can keep going for around 36 hours if you're a light to mid-range user.

Although the Samsung Galaxy S is one of the best-featured Android devices out there, Samsung needs to work on its Touchwiz UI to make it feel more finished.

HTC's Sense comes out on top here, but other than that, the Galaxy S conquers them all.

Are you looking for a new mobile phone? Check out the new Samsung Galaxy S II to see how the original handset has evolved.

The Samsung Galaxy S really is a range-topping device, and not just in Samsung’s portfolio either. The screen is easily better than any other smartphone on the market, battery life beats most and it’s speedy too. In fact, when the Android 2.2 update pops up, the handset will be even better. All Samsung needs to do now is jazz up its Touchwiz UI and this will most likely be the best smartphone that ever lived.